Kotoko Vs Etoile: We Will Give 200% But Limit Your Expectations – Felix Annan Tells Fans 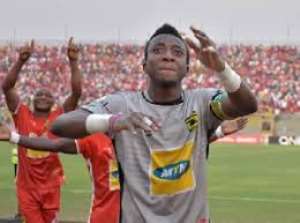 Captain for Kumasi Asante Kotoko, Felix Annan has called on the teeming fans of the club to limit their expectations as they prepare to take on Tunisia giants Etoile du Sahel in the second round of the CAF Champions League.

The Ghana Premier League side successfully eliminated Nigerian club Kano Pillars in the preliminary round of the inter-club competition after emerging as 4-3 aggregate winners.

Now billed to face Etoile du Sahel, goalkeeper Felix Annan has vowed on behalf of his teammates to give their 200% when they take on the Tunisian heavyweights in a double-header next month.

He has however appealed to the supporters of the Porcupine Warriors to limit their expectations a bit because the team is made up of several new players who are now adapting to the play of each other.

“We (players) are ready to give our 200% best but we want to tell the fans that at least they should limit their expectations a little bit for us because you could see this is a new team. Players are trying to jell together and it’s not bad.

“You could see that there is going to be more improvement so we are telling them that each and every game we are going to give our 200% best but they should limit their expectations and keep on supporting us”, the Black Stars goalkeeper shared in post-match interview after Kotoko beat Kano Pillars 2-0 on Sunday.

The first leg of the cagey tie between Kotoko and Etoile du Sahel will be played at the Baba Yara Sports Stadium on September 15, 2019.