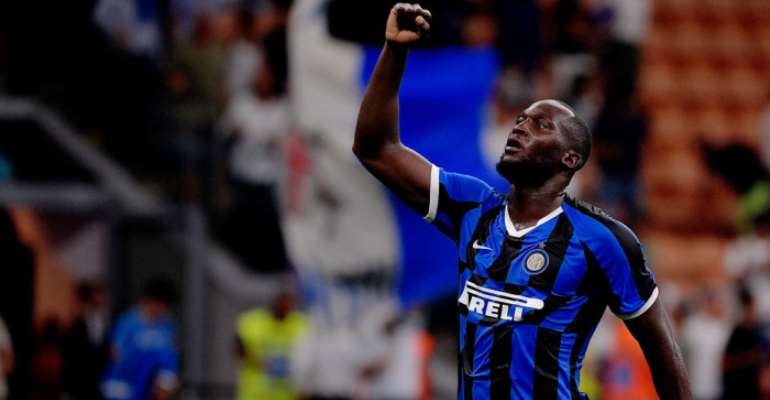 Belgian forward Romelu Lukaku scored on his Inter Milan debut as new coach Antonio Conte's reign got off to a perfect start with a 4-0 win over promoted Lecce on Monday.

Lukaku -- a 65 million euros ($73 million) summer signing from Manchester United -- scored the third goal on the hour mark at the San Siro.

A blunder by Lecce goalkeeper Gabriel parried the ball into the path of Lautaro Martinez allowing Lukaku to finish off.

Croatian Marcelo Brozovic had opened the scoring after 21 minutes with a powerful strike for his 15th goal in his sixth season with Inter.

But another new signing Stefano Sensi, a summer loan from Sassuolo, also found a way through three minutes later.

Lecce played the last quarter of an hour a man down after Brazilian Diego Farias saw red in his first game for a studs on tackle on his former Cagliari teammate Nicolo Barella.

Antonio Candreva blasted in the fourth goal on 84 minutes, allowing Inter to keep pace with eight-time reigning champions Juventus and runners-up Napoli who both won their opening league matches at the weekend.

Conte's arrival at Chinese-owned Inter has raised expectations of a first Serie A title since 2010.

The former Juventus and Chelsea boss took over from Luciano Spalletti who secured Champions League football with a fourth-place finish last season.

The 50-year-old's coaching credentials include three Serie A titles with Juventus from 2012 to 2014 and the Premier League with Chelsea in 2017.

And former Italy boss Conte's first game was against his hometown club Lecce, the team where he started his playing career, and who are back in Serie A after seven years.

The sideshow surrounding former Inter captain Mauro Icardi continued with the Argentine not named on the bench.

Inter director Giuseppe Marotta insisted there was no room in the club for the forward.

Icardi has rejected moves away from the San Siro despite being frozen out of the team and stripped of the captain's armband last season amid a protracted contract dispute.

Icardi's wife Wanda Nara, who is also his agent, said he wants to remain at Inter and had been told to stay by senior club bosses.

"We greeted Wanda Nara's comments with a bit of irritation, both for the timing and the method," Marotta told sports broadcaster DAZN before Monday's game.

"I absolutely deny that any of the club management, and in particular (president) Steven Zhang, have invited Icardi to stay."