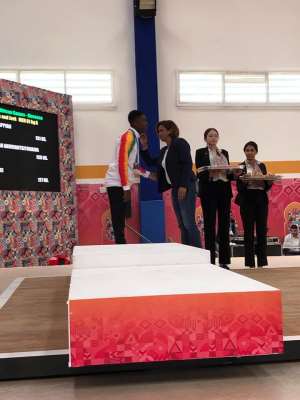 He becomes the second person to grab a medal for the nation.

Despite the poor preparations and low motivation, the least financed sport is saving Ghana.

Meanwhile, President of the Ghana Olympic Committee (GOC) and Ghana Weightlifting Federation, Ben Nunoo Mensah is very happy that his discipline has led the winning trail and he believes other athletes are going to win medals.

Ghanaians who heard of Akwei’s feat have also sent him congratulations messages.

Winifred Ntumy won the first medal in Morocco to put Ghana on the medals table.

In another development, Samed Shaku, the junior brother of the Samir brothers has qualified to the last four of the Men's Light Heavyweight 81kg, and he is a guaranteed medalist.