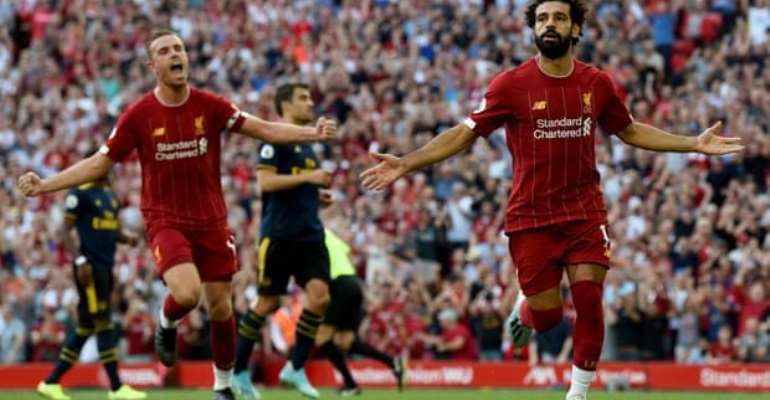 The following are talking points from the Premier League weekend:

IS THE 'BIG SIX' ERA OVER?
Manchester United losing at Old Trafford to Crystal Palace and Tottenham beaten by Newcastle at their new stadium -- individual upsets or is the concept of the 'big six' really still valid?

Liverpool and Manchester City are already in place as the top two after just three games and it is questionable whether they will be pushed anywhere near as hard as last season by Spurs.

While the top two have clearly broken away from the rest of the 'big six', this could be the season where United, Chelsea and Arsenal are not just fighting for Champions League spots but also facing a real threat from below.

Brendan Rodgers's Leicester City, who picked up an impressive 2-1 win at Sheffield United, are certainly contenders to push into the top six places.

Wolves may be juggling the demands of Europa League duties on so many Thursdays but it would not be a shock to see Nuno Espirito Santo's side breaking into that group.

Everton have not made a great start but once their new signings, such as Moise Kean, settle they too could mount a challenge.

Perhaps a more accurate breakdown of the top teams in the Premier League would be to say there is a 'big two' followed by 'a gang of four' being challenged by a new chasing pack of three or four clubs.

RELENTLESS LIVERPOOL'S INTENSITY IS KEY
Mohamed Salah was outstanding, Roberto Firmino full of quality and Liverpool were on another level in their 3-1 win over Arsenal at Anfield on Saturday.

But while individual genius, Arsenal's defensive weakness and a series of tactical elements all played major roles in the outcome, the win showcased the sheer physical power of Juergen Klopp's side.

"Our identity is intensity," said Klopp after the game which saw wave after wave of attacks wear down the Gunners defence.

In individual battles in a crowded midfield, Liverpool came out on top so many times.

Yes, Liverpool are a joy to watch when Salah and Firmino are turning it on but the early Premier League leaders are also benefiting from a level of fitness which is setting the standard.

"The tempo we put from the beginning was incredible, really incredible," said Klopp.

"There was no time to breathe. The opponent of the quality of Arsenal, you have to break somehow: break them physically."

Early in Klopp's reign at Anfield, the suspicion was that his high-energy approach came with a payback later in the season as the squad tired but that did not happen last year - with Liverpool winning the Champions League in June and the German has no concerns about burn-out.

"No, no. We are well prepared. We use every second of pre-season to be ready. That is why we were so tired in pre-season," he said.

LUIZ'S BRAIN-FREEZE
What was David Luiz thinking when he pulled the shirt of Mohamed Salah in the box and handed Liverpool a penalty to make it 2-0?

A 32-year-old Brazilian international with vast experience at the top level should not be giving away soft penalties like that -- yet with Luiz these things just seem to happen.

It perhaps explains why Frank Lampard was so relaxed about selling him at the end of the transfer window.

WATFORD WORRIES
Watford's 3-1 home defeat to West Ham on Saturday left them without a point from their opening three games and while speculation over the future of manager Javi Gracia feels ludicrous, there is clearly something wrong at Vicarage Road.

The Hornets finished in a comfortable 11th place last season and reached the FA Cup final, so Gracia has surely earned a little patience.

But Watford also lost their final four matches of last season in all competitions, including the record-equalling 6-0 FA Cup Final defeat to Manchester City, which makes it a losing streak of seven games.

ABRAHAM MAKES HIS MARK
Tammy Abraham stuck 25 goals on loan at Aston Villa in the Championship last season but returning to his mother club Chelsea in the summer there were question marks over whether he can be effective in the top flight.

His two goals in the 3-2 win at Norwich on Saturday were an early sign that he could thrive in Lampard's young side.