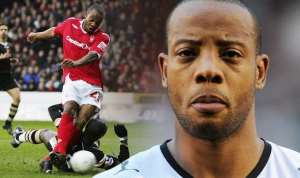 It was emotional scenes all over at the Craven Cottage on Saturday afternoon when fans of Nottingham Forest paid tribute to Ghanaian international Junior Agogo on the 23rd minute of their Championship match against Fulham.

The striker was pronounced dead last week whiles receiving treatment in England after battling with stroke since 2015.

Following his sad demise, fans all over the world, especially in Ghana and at clubs where he played during his active days have been mourning him.

The Black Stars attacker featured for Nottingham Forest from 2006 to 2008 where he netted 28 goals in 64 appearances.

During the Championship side’s weekend fixture against Fulham, fans of the Reds paid their respect to the Ghanaian by chanting his name on the 23rd-minute mark in honour of his jersey number whiles at the club.

Watch how Nottingham Forest fans paid tribute to Junior Agogo in the video below.