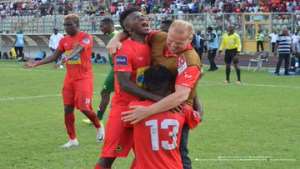 Head Coach for Kumasi Asante Kotoko, Kjetil Zachariassen has disclosed that he is happy with the performance of his players that resulted in their 2-0 win over Kano Pillars in their second leg tie of the first round of this year’s CAF Champions League.

The Ghana Premier League club welcomed their Nigerian counterpart to the Baba Yara Sports Stadium on Sunday afternoon after losing their first leg 3-2 a fortnight ago.

Needing a convincing win to eliminate the Kano-based club, the Porcupine Warriors emerged as 2-0 winners at the end of the match to progress to the next round of the inter-club competition courtesy a 4-3 aggregate scoreline.

Speaking at his post-match press conference, Coach Kjetil Zachariassen shared that he was impressed with the winning mentality and belief he players showed throughout the entire duration of the game.

“Am quite happy with how the boys did the tactics today. They were quite strong in their belief. We talked about it a long time now, to show mentality, and everybody that comes here must follow us and not the other way around. I know the guys can play so am not surprised though”, the Norwegian tactician said.

Kotoko now moves on to play Etoile du Sahel in the second round of the CAF Champions League as they bid to qualify for the group stage.