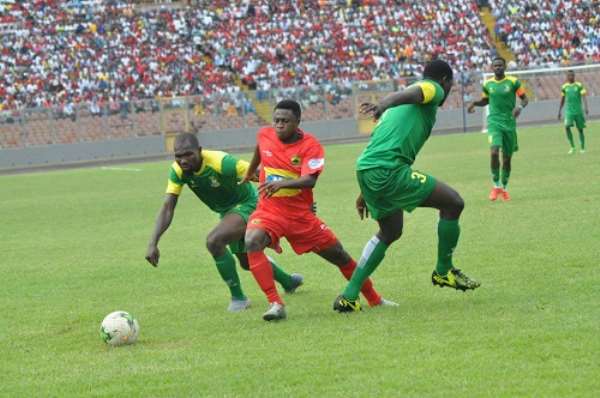 Asante Kotoko captain, Felix Annan, says his teammates have no excuse than to live up to their call up by proving themselves worthy of the team in their next match against Etoile the Sahel in the CAF Champions League.

He said Kotoko players did not need anyone to motivate them to give of their best since being part of the team was enough motivation.

Speaking to the media after Kotoko defeated Kano Pillar of Nigeria 2-0 on Sunday in Kumasi to qualify for the next stage of the competition on a 4-3 aggregate, Annan said it would have been a big blow if Kotoko had lost the match and crashed out of Africa's premier club competition.

“Kotoko are a big team and when you are playing such a big team it is up to you to do your best to maintain your position,” Annan said.

He said the experience from last season's CAF Confederation Cup campaign was still fresh on their minds and they would want to improve on their continental outing this year and was hopeful that the team would go further this year.

He was grateful to the supporters for turning out in their numbers at the Baba Yara Stadium to support the team and appealed to them to continue to rally behind the team.

Kumasi Asante Kotoko yesterday rose up to the occasion to beat the Kano Pillars of Nigeria to advance to the next stage of the CAF Championship league.

Defender Matthew Kelvin Andoh opened the scoring for Kotoko in the second minute of the game when a shot from Patrick Yeboah was parried by the Beninese goalkeeper, Suraj Olayiwola Ayeleso, into his path and he fired home the rebounder to send the capacity stadium agog.

The thousands of the spectators who came to the stadium to lend their support to their darling club went into a wild jubilation.

Even though a slim win would have seen Kotoko through to the next stage on the away goal's rule, the home side still mounted pressure on the visitors for more goals.

And when it was almost certain that the game was going to end on that scoreline, Emmanuel Gyamfi sent the supporters into a wild jubilation in the 80th minute when he scored Kotoko’s second goal.

Pillars, who were probing for an equalising goal to earn a ticket to the next round, had to relax the tempo of the game to defend their goal line and prevent a cricket score by Kotoko.

Kotoko will next play against Tunisian giants, Etoile du Sahel.