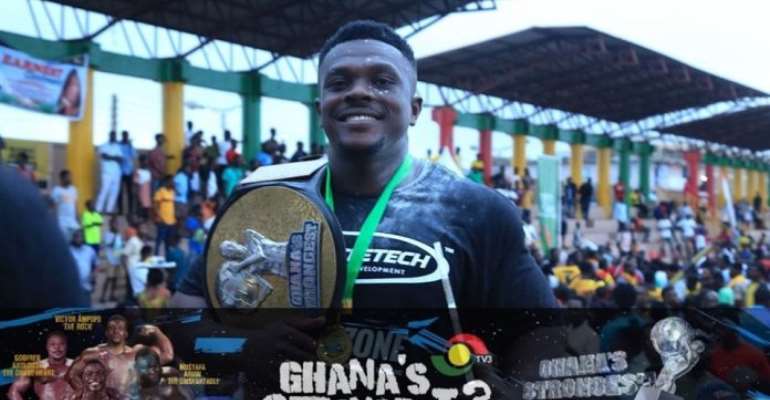 Master Victor Ampofo popularly known as Vandame, a student of the Kwame Nkrumah University of Science and Technology (KNUST) is the winner of TV3’s Ghana’s Strongest reality show held at the Jubilee Park, Kumasi on Saturday, 24th August 2019.

He pipped three other contestants: Ahmed Boakye, Godfred Akwabila and Mustapha Arhin for the coveted prizes which included GHC 10,000 with a car as well as souvenirs and products from the sponsors.

There were various competitions held on the day which included truck pull, Luwaluwa weight lift, giant tyre flip among others.

The 3-time KNUST Strongest winner and first runner-up in last year’s edition, dominated most of the events, earning a total of 75 points to be crowned champion. Godfred Akwabila finished in second place with 72 points, Ahmed Boakye placed third with 70 points, and Mustapha Arhin claimed fourth place with 35 points.

The 2019 Ghana’s strongest began with eleven athletes with three KNUST students involved in the competition; Nuno Brown, the Strongest student in KNUST for 2019, 2nd runner-up in the 2019 KNUST Strongest contest Shiva Oduko and Victor Ampofo “Van Damme” all competed in the event.

It was a contest of champions from the various auditions across the country.