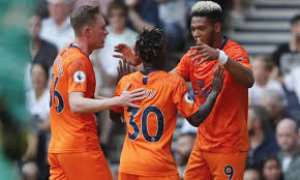 Ghanaian winger Christian Atsu returned from injury over the weekend to feature for Newcastle as they beat Tottenham Hotspur 1-0 on Sunday afternoon.

The player had been sidelined from action for the past two months following his injury at the 2019 Africa Cup of Nations (AFCON) during Ghana’s match against Cameroon.

He started training with his Newcastle teammates last week after being declared fit to feature for the side.

Though he started Sunday’s match at the Tottenham Hotspur Stadium from the substitute bench, he was called upon when summer signing Allan Saint-Maximin sustained an injury just 17 minutes into his English Premier League debut.

Christian Atsu did not disappoint and immediately showed his quality by providing an assist that produced that only goal of the match. His cheeky pass on the 27th minute found Brazilian Joelinton who calmly fired the ball into the back of the net to hand Newcastle their first win of the season.

Atsu, 27, ended up marking his return from injury with an important win with the Magpies over the Lilywhites.

The former Chelsea and FC Porto attacker made 28 appearances for Newcastle last season and scored just once. Having opened his account on match week 3, he looks well on course to improving that statistic at the end of what will be a very long season.