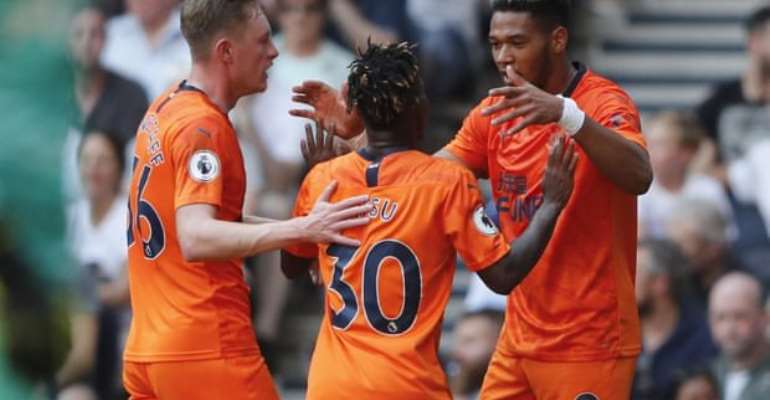 A wrap of the Premier League matches played on Sunday.

Atsu, sent on after Allan Saint-Maximin had to go off with an early hamstring injury, provided the assist with his first significant contribution.

Spurs lacked the creativity to break down a resolute Newcastle side, whose four-man midfield spent a large chunk of the contest sitting deep in front of a back five.

Also, Pep Guardiola hailed David Silva as "one of the best players" he has seen after he contributed to all three of Manchester City's goals in a convincing win at Bournemouth.

On landmark day for Silva, making his 400th appearance for City, he again demonstrated his enduring quality as the champions moved up to second in the Premier League, two points behind leaders Liverpool.

The 33-year-old began the move for Sergio Aguero's opener and then provided assists for Raheem Sterling and Aguero to add to the Blues' tally.

"He played incredibly well. David in this kind of game - with a defence so deep and with such few spaces - is so good," Guardiola said.

"He's one of the best players I've ever seen."

Sterling then doubled their advantage with his fifth goal in as many matches, flicking a shot beyond Cherries keeper Aaron Ramsdale after a fine Silva pass.

The 31-year-old emphatically finished from 10 yards to record his 400th career goal.

And Raul Jimenez scored a stoppage-time penalty to salvage a point for Wolves and deny Burnley victory at Molineux.

Ashley Barnes looked to have won it for the Clarets after pouncing from around 25 yards - his fourth goal in three Premier League games this season - against a disjointed Wolves side playing their third game inside a week.

The hosts beat Torino in a Europa League play-off match on Thursday after drawing with Manchester United last Monday, and their hectic schedule appeared to have caught up on them as they struggled for long periods.

Burnley were denied a second goal when Rui Patricio produced an excellent save to keep out Chris Wood while Ben Mee headed against the bar with the rebound coming off Wolves defender Ryan Bennett and hitting the post.

However, Wolves were awarded a penalty in the dying moments when Erik Pieters fouled Jimenez.

After a video assistant referee check, Jimenez stepped up to calmly roll the ball past Nick Pope and earn Wolves a third successive Premier League draw.