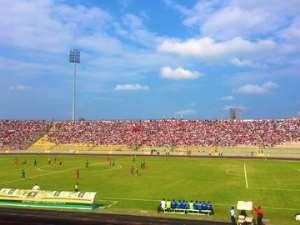 Kumasi Asante Kotoko has progressed to the next round of the CAF Champions League after posting a 2-0 win over Kano Pillars on Sunday afternoon to emerge as 4-3 aggregate winners at the end of the preliminary round.

The Porcupine Warriors went into today’s fixture with a lot of pressure to win after losing 3-2 to the Kano-based side a fortnight ago when they visited them for the first leg.

A strong starting lineup named by coach Kjetil Zachariassen stepped up on the afternoon and got the job done by putting two goals into the net of their opponent, one in each half to seal a resounding victory.

New signing Kevin Andoh opened the scoring for the Kumasi based-club just 3 minutes into the first half when he fed on a loose ball inside the opponent’s 18-yard box after Pillars goalkeeper Suraji Ayeleso failed to hold on to a powerful drive from Richard Arthur.

The homes side held on to that equalizer and went into the break well on their way to qualifying to the next round of the top-tier inter-club competition.

Despite continuing to dominate in the second half of the game, Kotoko had to wait until the 79th minute before netting their second goal. This time around it was explosive winger Emmanuel Gyamfi who finished off a well-worked team move.

The game finally ended 2-0 with the Ghana Premier League side eliminating the Nigerian club courtesy a 4-3 aggregate win.

Asante Kotoko has now set up a date with Etoile du Sahel in the second round of this year’s CAF Champions League.