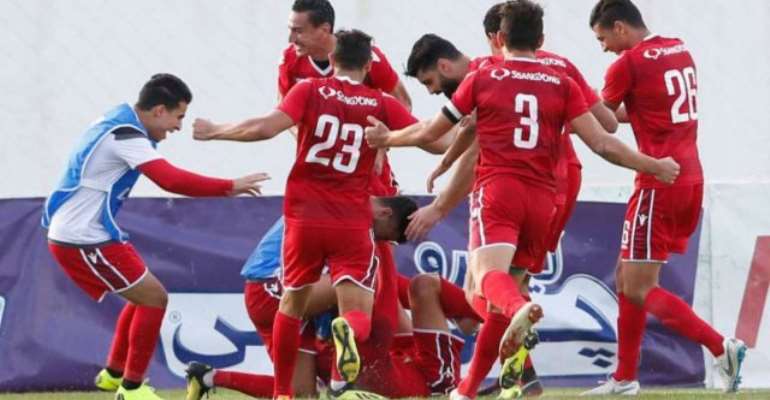 Etoile du Sahel roared back from a 2-1 first-leg deficit to defeat Hafia 7-1 in the second-leg of their Caf Champions League preliminary round at Stade Olympique de Sousse on Saturday.

The Tunisians led 1-0 at half-time through a Mortadha Ben Ouannes penalty in the 38th minute, which still gave the Guineans a chance of getting something out of the game.

However, a blitz of goals early on after the game’s restart saw Karim Laribi score three times within 10 minutes, before adding his fourth goal late on, to give the game a more comfortable look. Firas Belarbi also netted a brace – in the 51st and 62nd minutes – to complete the scoring for Faouzi Benzarti’s men.

The visitors from Guinea netted a consolation goal in the 53rd minute, but it couldn’t stop an 8-3 aggregate defeat at the hands of the North Africans.

In South Africa, Mamelodi Sundowns overturned a 2-1 first-leg defeat by AS Otoho to win 4-0, consequently progressing 5-2 on aggregate.

Uruguayan forward Gaston Sirino opened the scoring in the 14th minute to put the Brazilians ahead on away goals. Mosa Lebusa doubled their advantage 10 minutes later before Sirino netted his brace in the 34th minute. Themba Zwane then completed the scoring for Pitso Mosimane’s side in the 40th minute.

In Cairo, Zamalek thrashed Dekadaha 6-0 to carry the Egyptian outfit through after their 1-0 win in Somalia a fortnight ago.

The pair of Mostafa Mohamed and Shikabala netted braces, while goals from Mahmoud Alaa Eldin and Mahmoud Abdelaziz completed the rout at Cairo International Stadium.

Raja Casablanca also took advantage of playing the second-leg at home following a 4-0 win over Brikama United at Stade Mohamed V. Both sides played out to an entertaining 3-3 draw in Gambia two weeks ago, but the Moroccans showed their class in the return leg.

An Ayoub Nanah brace and goals from Soufiane Rahimi as well as Mohsine Moutouali helped The People's Team to a convincing win on home turf.

Orlando Pirates couldn’t take advantage of playing in front of their fans after crashing out against Green Eagles at Orlando Stadium on Saturday night.

Both sides played to a 1-1 draw in South Africa, which saw Pirates knocked out 2-1 on aggregate following a 1-0 loss in Zambia.

Happy Jele put the Buccaneers in front on the hour mark, but the visitors pegged them back immediately through Amity Shamende, and it stayed that way despite Pirates’ attempts to score.

There was late drama in Sudan in the encounter between Al-Merrikh SC and JS Kabylie as it ended 3-2 to the former.

The Algerian outfit went into the encounter with a 1-0 advantage from the reverse fixture, but goals by Bakri Abdelgadir Al Madina (two) and Tag Abdel Rahim saw the hosts lead 3-0 with 15 minutes to go.

Nonetheless, strikes from Hamza Banouh and Taoufik Addadi in second-half stoppage time broke the hearts of the home team as it ended 3-3 on aggregate, with the North Africans progressing via away goals.

The emphatic win sees the Senegalese outfit progress after reversing a 1-0 loss in Liberia.

In Angola, a Mabululu brace for C.D. Primeiro de Agosto helped the home side to a 2-0 victory over KMKM at Estadio 11 de Novembro.

Having won the first meeting between the sides 2-0, the Central African club progressed 4-0 on aggregate.

Botswana outfit Township Rollers couldn’t make the most of home advantage when they lost out to Young Africans 1-0 at Estadio Nacional de Botsuana.

Juma Balinya put the visitors ahead in the 41st minute to put them 2-1 up on aggregate (first meeting ended 1-1). The hosts had a penalty just after the hour mark but failed to convert, and were consequently eliminated from the continental showpiece.

Zesco United sealed a 3-0 aggregate win over Green Mamba, following a 1-0 success in Zambia on Saturday.

A Jesse Were goal in the 14th minute put the Zambians in front, and there were to be no more goals and they progressed comfortably.

An exciting encounter between Platinum and Big Bullets featured five goals scored and a red card as the home side triumphed 3-2.

Devon Chafa opened the scoring for the Zimbabweans in the third minute, and it stayed that way until Albert Eonde received his marching orders in the 26th minute.

The visiting side equalised four minutes later through Peter Banda, but Never Tigere sent the hosts back in front six minutes later, and it stayed that way till half-time.

With 15 minutes remaining, the Malawian club snatched another equaliser, but the resilient, undermanned hosts got a winning goal six minutes later through Perfect Chikwende.