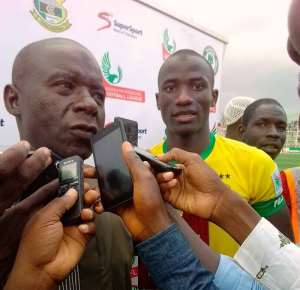 Head coach for Kano Pillars, Ibrahim Musa has emphasized that his team will attack Kumasi Asante Kotoko when they lock horns at the Baba Yara Sports Stadium for the return leg of the first qualifying round of the CAF Champions League on Sunday.

The two clubs seek progression to the next stage of the top-tier inter-club competition on the continent but will need a favorable result from the second leg to do so.

The Nigeria side won the first leg 3-2 and holds a slight advantage ahead of their crucial game with the Ghana Premier League giants tomorrow.

Speaking in an interview with SCORENigeria, Coach Ibrahim Musah has vowed to play an attacking game on the matchday whiles stressing that Kotoko was lucky to have scored two goals when they visited the Sani Abacha Stadium a fortnight ago.

“We will attack because I am a coach who favours attacking football”.

“You invite a lot of pressure on your goal if you resort to playing defensive and so we will take the game to Kotoko”.

“They were only lucky to score two goals against us in the first game, but we are working on dealing with set pieces, which led to both goals”, the gaffer noted.

Kotoko needs to win without conceding to be guaranteed qualification to the next round of the CAF Champions League.

The match kicks off at 15:00GMT tomorrow.