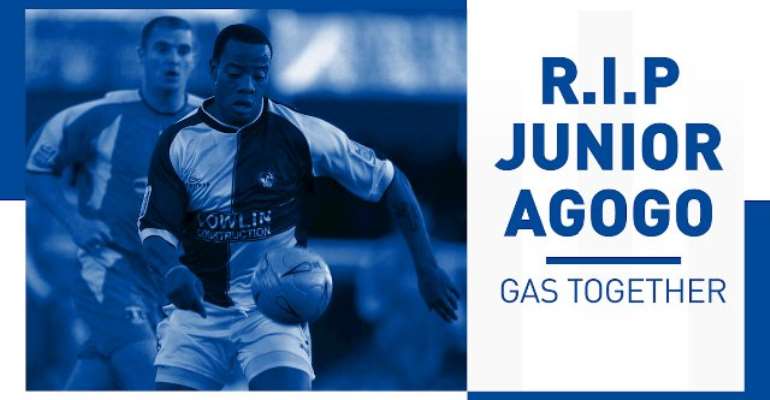 Football League One side, Bristol City will hold a minute’s applause in honour of former striker Junior Agogo ahead of their clash with Oxford United on Saturday, August 24, 2019.

In a statement on the club’s website, Bristol Rovers expressed sadness at the news of the passing of a player. “Bristol Rovers Football Club are sad to hear news of the death of former Rovers striker Junior Agogo.”

They announced plans to pay respects to the former player with a tribute on the big screen before their game against Oxford United as well as a minute's applause before kick-off.

“In an effort to pay respects to Agogo, who was a prolific goalscorer in his time as a Gashead, scoring 41 times in 126 games, the club plans to pay tribute to the Ghanaian international on Saturday 24th August.”

“Furthermore, the club will also hold a minute's applause before kick-off, when the players are all out on the field. We ask all supporters to observe this minute’s applause and take this time to remember their fondest memories of a Rovers legend.”

“Finally, his death will be acknowledged in our programme for the Brighton Hove & Albion game, whilst a full tribute will be included for the game against Accrington Stanley.”

One of Agogo's best-remembered performances for Rovers came in October 2004 against Yeovil Town at the Memorial Stadium.

The Gas were trailing 2-0 and were down to nine men after having Dave Savage and Steve Elliott sent off.

But they fought back to claim a thrilling draw, thanks mainly to an outstanding performance from Agogo.

The Rovers striker set up James Hunt to make it 2-1 and then scored a dramatic equaliser himself to rescue a point for his side.