Callum Hudson-Odoi: From Ball-boy At Stamford Bridge To Key Player At Chelsea 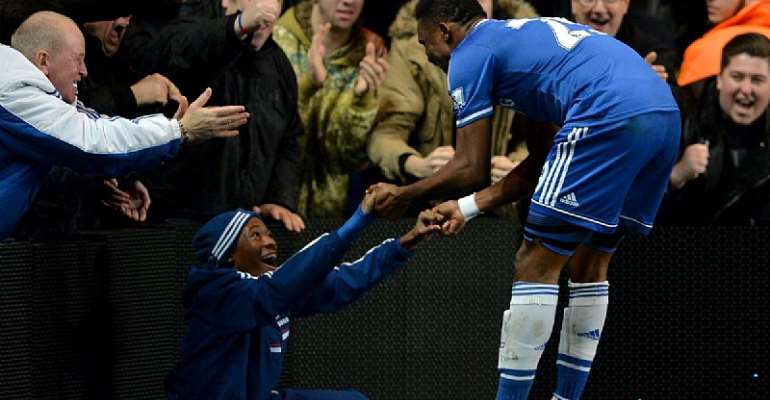 After this picture of a 13-year-old Callum Hudson-Odoi celebrating with Samuel Eto’o as a ball-boy at Stamford Bridge.

The former Barcelona and Inter Milan forward ran over to celebrate with the English born Ghanaian youngster after completing his hat-trick in a 3-1 win over Manchester United at Stamford Bridge in January 2014.

Now a fully established member of the Chelsea squad as a player himself, Hudson-Odoi clearly remembers enjoying the moment with the Cameroonian striker.

He said: "I remember him scoring a hat-trick and the third goal was near where I was sitting in the corner. He came over to celebrate. Obviously, I was happy for the team because they’d won and for him as well.

"When he started celebrating, I was delighted and he just saw me, came over and held my hand. For a young boy seeing a professional footballer coming to do that for you, it was crazy. I was smiling so much.’

The special moment served as an inspiration for that young boy making his way through the age groups in the Chelsea Academy.

He said: "You dream of being a professional as a kid, especially at the club I’ve now been at for so long. You think, “Can I become like him or at least get to the top where he is?” and I’m now fulfilling that dream.

"It’s the boyhood club I’ve always loved and played for, so I’ve always felt that that dream is there. Now I just want to carry on and keep going."

And after that shared experience with one of his Chelsea heroes, can we expect to see a similar celebration with a ball-kid when Hudson-Odoi next gets on the scoresheet?

"Yeah definitely. If I score a goal and I see someone there, I’d definitely celebrate with them. For them, it would be like a dream as well. They would feel like I felt at the time so that would be a chance for me to give back to them.’

As the England international looks ahead to a return to action following injury, he also confirmed that his recovery is going well.

He said: "I’m back in full training with the squad so everything’s good. It’s now about getting back to match fitness and hopefully, I’ll be back on the pitch soon."

Hudson-Odoi is now a first-team star and England international after a stunning debut season in the Premier League and on the verge of signing a new £200,000-a-week deal.

He was a target for Bayern Munich in the winter transfer window but Chelsea expressed their desire to keep the youngster.

The highly-rated 18-year-old is likely to be ready for selection for Chelsea after the international break.