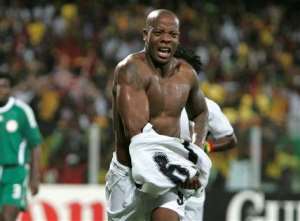 Ghanaian footballers around the globe have mourned the demise of Junior Agogo who was pronounced dead on Thursday morning.

The news came as a shock to football lovers after the former Nottingham Forest player had recovered from a stroke he suffered back in 2015.

The former Black Stars striker is remembered by many for his contribution to the Black Stars and his outstanding performance during the 2008 Africa Cup of Nations tournament hosted in Ghana.

The former Zamalek and Nottingham Forest died at the age of 40.