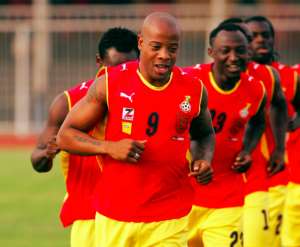 It came as a piece of shocking news to many Ghanaian football fans when it was confirmed that former Ghana striker, Junior Agogo has passed on.

The Ghanaian striker suffered a stroke back in 2015 which left him debilitated just two years after retiring from playing.

Agent Saif Rubie tweeted: "Just heard the news that one of my first clients ever Junior Agogo has passed away. Still can't believe it. One of my proudest moments in football is seeing him smash the AFCON in Ghana."

Agogo was a star of the national team and the poster boy of the 2008 African Cup of Nations hosted in Ghana.

The bulky forward opened up on his health problems in an emotional BBC interview called "Speechless" two years ago, discussing his battle to regain his speech.

“I was running with my dog. I was coming back home. I was near the Marriott Hotel and the stroke happened,” he said.

“When I woke up I was in hospital with my mum. I couldn’t speak. I was in a bad way.

“I had thoughts, but I was like where is my voice. I was baffled, man.”

At the time, he was reported to be living in London with his mother and dog, Blanket, in a flat described as a shrine to his career.

“I’m alive. I’m well. Let’s get onto my football days,” he said in the programme, pointing to shirts on the wall.

Agogo started his career with Sheffield Wednesday during their time in the Premier League, making two appearances for the club, before a stint in the United States.

He returned to England with QPR in 2002 then moved to Barnet, bagging 19 goals in 39 games to earn a move to Bristol Rovers.

It was with Rovers that he starred with over 40 goals across three seasons, earning his move to Forest and firing them into the Championship.

He scored 13 goals as they earned promotion to the Championship from League One before being sold to Zamalek in 2008.

He finished his career in Scotland, being signed by former Forest boss Colin Calderwood at Hibernian on a one-year deal in July 2011.

Agogo scored once in 14 appearances before retiring at the end of the season.

On the international stage, he scored the winner for Ghana in the 2008 African Cup of Nations quarter-final against Nigeria and was a key part in their third-place finish.

Below are some of the tributes for the former Ghanaian international...

JHS Not Increased To Four Years Or Reduced SHS Duration – Na...
2 minutes ago

We've Been Begging To Survive Over Closure Of Our Shops – N...
2 minutes ago