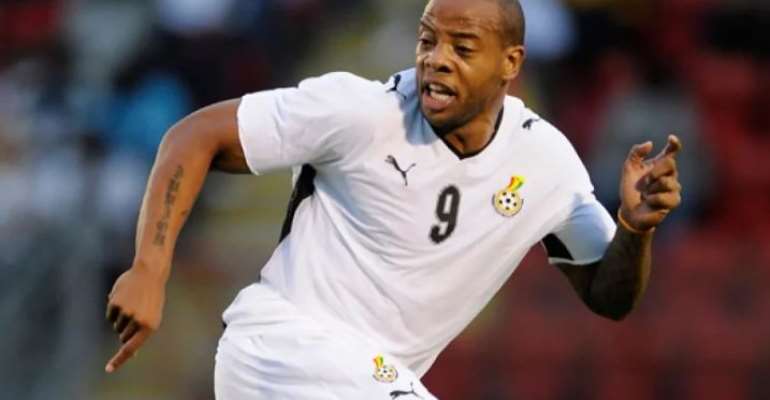 The former Zamalek FC striker passed on in England at a hospital on Thursday, August 22nd, 2019.

He has been suffering from a stroke since 2015 and underwent rehabilitation two years ago.

Agogo could be remembered by most Ghanaians for his wonderful performance for Ghana at the 2008 Africa Cup of Nations.

The former Black Stars striker played for several clubs in England, the United States of America and Cyprus. Career

Agogo scored 67 goals in over 200 games over the course of his club career.

This included stints in England, with a host of clubs including Nottingham Forest and Bristol Rovers; in Egypt with Zamalek, in Scotland with Hibernian and in Cyprus with Apol. Limassol.

He enjoyed the most prolific period of his career with Bristol Rovers scoring 35 times for the club before moving to Nottingham Forest in 2006, scoring 21 times.

However, it is his exploits with the senior national team, the Black Stars that he will be remembered for by most Ghanaians.

He scored 12 times in 27 appearances for the Black Stars, producing a star turn at the African Cup of Nations tournament in 2008 which Ghana hosted, where he bagged three goals as Ghana reached the semifinals.

A lot of people have taken to social media to express their sadness over the news.