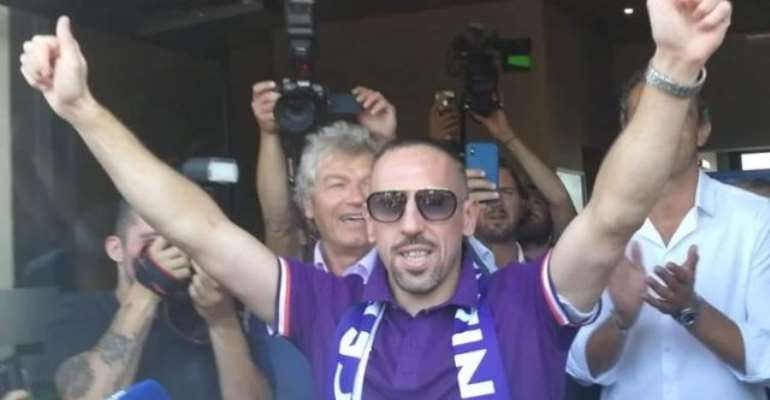 Bayern Munich legend Franck Ribery has signed for Fiorentina, the Serie A club announced on Wednesday.

The 36-year-old, who won a record nine Bundesliga titles during his stay in Germany, has penned a two-year deal with the Florence-based side to take him through until 2021.

The former France international brought the curtain down on a 12-year stay with the Bavarian giants last season after helping them to another domestic triumph.

Having started his career with his hometown club Boulogne in 2000, he spent spells with Ales, Brest, Metz, and Galatasaray before moving to Marseille in 2005, where he made his name, helping the club to back-to-back Coupe de France finals.

He subsequently moved to Bayern two seasons later, in 2007, for a then club-record fee of €25 million (£22.9m/$27.7m), where he helped the club dominate German football for the subsequent decade, winning his first title in his maiden season.

Along with his domestic league triumphs, was also a six-time DFB-Pokal Cup winner and, in 2013, was a member of the Bayern team that memorably achieved the treble after they lifted the Champions League against Borussia Dortmund at Wembley.

In 2008, he was named German Footballer of the Year, making him one of only five foreign players to date to be awarded the honour, while he came third in the Ballon d'Or race in 2013.

At international level, Ribery was called up to the national team for the first time in 2006, playing a part in their World Cup near-miss against Italy in Germany, and he would go on to become a consistent presence until 2014, when he retired from representative football following the World Cup in Brazil, which he missed through injury.

The former Viola boss took the reins in Florence for a second time in April, following the resignation of Stefano Pioli, with the club just avoiding a close shave with relegation from Serie A last season.