I Could Have Been Knocked Down By A Car Because I Wanted To Take A Picture With Mayweather, Gyan 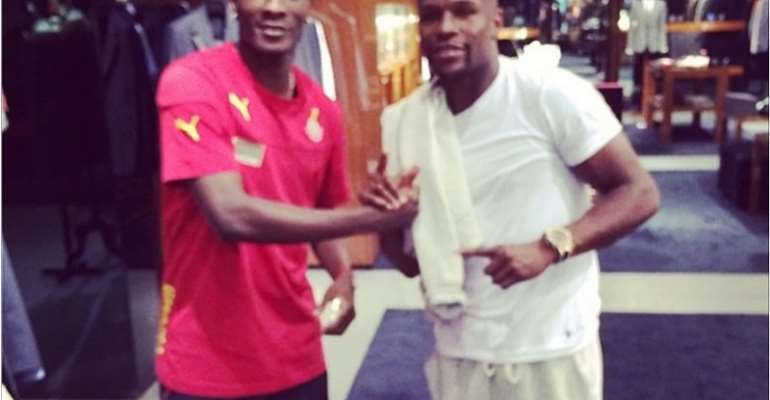 General captain of the Black Stars, Asamoah Gyan has disclosed that he could have been knocked down by a vehicle because he wanted to take a picture with Floyd Mayweather in Miami in 2014

According to the 33-year-old, it was his dream to meet Floyd Mayweather and when the opportunity presented itself, he was ready to do everything just to take a photo with the American boxing legend.

“The only celebrity I requested a photo from was Mayweather. I met Mayweather at Miami ahead of Brazil World Cup. I had not met him before that.

"We had just had a conversation about Mayweather because he was in Miami. I went to sleep, but after the conversation, I woke up to see several missed calls from John Boye” he said in an interview with Kwaku Manu on Youtube show Aggressive.

“They went to a mall, just across our hotel room. I was even scared after seeing the numerous missed calls and when I returned the call, John Boye told me they have met Mayweather at the mall.

“I quickly left my hotel room in pursuit of Mayweather. I could have been knocked down by a vehicle if I had not been cautious.

"I was stopped by one of his bodyguards, but I was saved by a group of African fans who began to hail me.

“The bodyguard after realising my popularity went online to do a background checks on me before he went inside to call Mayweather.

“I was dumbfounded when I meet him. We took a picture and exchanged numbers. He didn’t give his number to me, his bodyguard did, so I was chatting with him instead”.

‘Bawumia’s Usefulness In NPP Has Reduced Drastically’ – Mago...
14 minutes ago