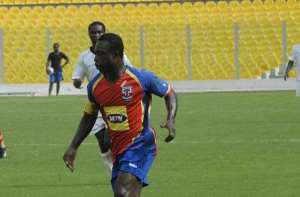 Former Ghanaian International, Charles Taylor, has made an explosive allegation that players pay bribes to officials to get into the country’s national team, the Black Stars.

The former Hearts of Oak and Asante Kotoko play-maker says players have to pay bribes in different forms to get a call-up to represent Ghana in international football games.

Taylor has launched a scathing attack on coaches of Ghana national teams, insisting that they accept ‘bribes’ before selecting players to represent the country in recent times.

“I think the fortunes of the Black Stars are dwindling and it’s because players have to pay bribes to officials to gain entry into the national team.

“You have to pay before you can play for black stars. All the players playing for the national team are negative players, I took my player to black stars and they asked me to pay before,”Charles Taylor told Gideon Okyere Anim on KINGDOM ALL SPORTS on Accra based Kingdom 107.7 FM