It’s Make Or Break For Ashgold, Kotoko In Africa 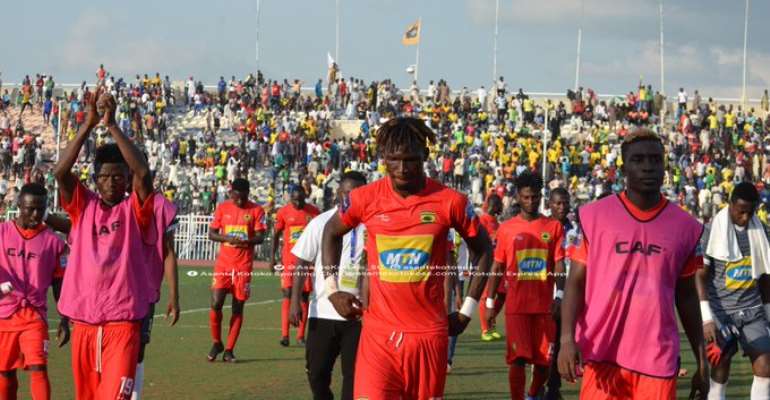 Asante Kotoko and Ashgold are confident they would clear the first hurdles of their respective continental competitions by exploiting their home advantage this weekend in the reverse fixtures of the CAF Champions League and Confederation Cup respectively.

Both clubs have important away goals from their first encounters which they hope to count on to help them seal qualification into the next stage of their campaigns.

While Kotoko are hoping to count on their away goals to overturn a 2-3 loss to Kano Pillars in the first leg clash at the Sani Abacha Stadium in Kano, Ashgold have an advantage going into Saturday’s clash at the Len Clay Stadium in Obuasi after holding their Equatorial Guinea rivals, Akonangui FC, to a 1-1 draw in the first leg of their Confederation Cup fixture.

Ashgold captain, Shafiu Mumuni, is confident the Soccer Miners will win the return encounter at Obuasi to progress in the competition. He said their Brazilian coach Ricardo da Rocha had taken the players through intensive drills to sharpen their rough edges ahead of Saturday’s clash.

“Since we came home our coach has intensified training, and I believe this is a strategy for us to win. Besides, the players are hungrier for success. We want to win and qualify for the next stage to make our fans proud," he told the Graphic Sports.

For the Ashgold forward, playing against Akonangui FC has equipped them with valuable knowledge about their opponents to handle them better at Obuasi.

“We didn’t know our opponent before the first game. We now know them well. They have quick pace and use the flanks a lot. That’s one of their strengths but they are not good at inter-positional passing. We have worked on that and it will help us a lot," observed Shafiu.

His club’s CEO, Frederick Acheampong, is also positive of a victory on the back of their impressive showing in the first leg match and their high-intensity training ahead of the return leg.

“We're preparing very well and our target is to win Saturday's game. We are highly confident we will win," said Mr Acheampong.

Perhaps a lot more pressure will be brought to bear on Kotoko’s Norwegian coach Kjetil Zachariassen, whose expensively assembled team cannot afford to crash out of the competition at the first hurdle.

The Porcupine Warriors will be looking to dismantle Pillars on home grounds in Sunday’s match of redemption, with two crucial away goals already in the kitty

Kotoko winger and assistant captain, Emmanuel Gyamfi, says Sunday’s match in Kumasi throws up a challenge to the players to prove their worth and Kotoko’s clout in continental competitions, having featured in the Confederation Cup last season.

“As Kotoko players, we know that this is the time to show our worth. We want to win this match badly. We are determined to position the club where it deserves, so we have intensified training to keep high our momentum to win convincingly against our opponent,” Gyamfi told the Graphic Sports.

The midfielder, who is playing his fifth season with Kotoko, blamed the slippery turf at the Sani Abacha stadium for their defeat and but was sure they would capitalise on their territorial advantage in Kumasi to beat the Nigerian side.

“The pitch we played on was very slippery and gave them the advantage. Now we are also playing on our pitch, which will also give us an advantage. We are hopeful that our supporters will fill up the stadium and cheer us to victory,” he declared in a battle cry to the Kotoko faithful.

Already, Pillars coach, Ibrahim Musah, has sounded a caution to the two-time African champions not to get carried away by their away goals but to brace up for what could be their toughest battle yet, which could send Kotoko packing out of the Champions League.

“We are coming to Ghana to beat Asante Kotoko as we did to Al Ahly SC in Egypt after a one-all draw in a 1st Leg at Sani Abacha Stadium," the Pillars coach told Kumasi-based Nhyira FM last week.