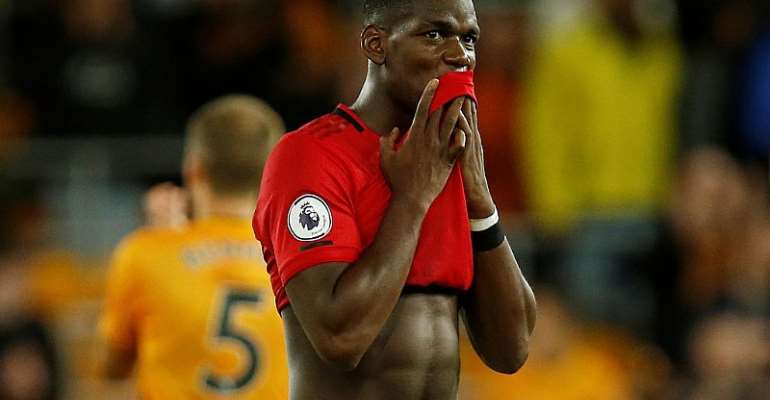 Manchester United were forced to settle for a 1-1 draw away at Wolverhampton Wanderers on Monday night after Paul Pogba's crucial penalty was saved.

It was a controversial decision for Pogba to take the spot kick as Marcus Rashford had scored one in last weekend's 4-0 victory over Chelsea.

The Frenchman has now missed four Premier League penalties in the last year.

United would have gone top of the table with a win, but instead they were left to reflect on a wasted opportunity to deliver a statement of intent to the league.

United defended well in the first period, denying their opponents a single shot on target before half time.

Wolves returned from the break looking revitalised and Mexican forward Raul Jimenez nearly levelled the score when he glanced a free-kick against the far post.

Wolves' pressure paid off in the 55th minute when a short corner was worked to Ruben Neves, who curled a sublime strike beyond David de Gea.

United had a golden chance to reclaim the lead when Pogba was brought down in the penalty area by Conor Coady, but goalkeeper Rui Patricio came out on top in the spot kick.

Solskjaer refused to blame the penalty taker, saying that he allows both Pogba and Rashford to take the responsibility.

"The two of them are designated the penalty shooters and it's up to them there and then who feels 'this is mine'," he said.

"The two of them have been very confident. I like players with confidence and the feeling that 'I can do this'."

Former Manchester United captain Gary Neville called on Solskjaer to resolve the issue before the next game.

"This is a Manchester United penalty, this not a tombola, this is not under-fives on the school field.

"Rashford scored last week - take the penalty. But there wasn't a leader out there. Something wasn't right."

United return to action on Saturday afternoon at home to Crystal Palace, while Wolves face a Thursday night trip to Torino in the Europa League play-offs.