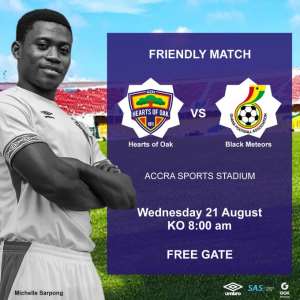 The Ghana u-23 team, the Black Meteors has lined up a friendly match with Ghana Premier League giants, Accra Hearts of Oak this Wednesday, August 21, 2019.

The warm-up game is part of plans by Meteors head coach Ibrahim Tanko to adequately prepare his side for their upcoming assignment in the qualifiers to the u-23 Cup of Nations.

The West African nation is billed to play a two-legged encounter against North African side Algeria in early September. The clash will serve as the final eliminator with the team that reign supreme securing qualification to the continental showpiece.

The first leg of the tie will be played in Ghana on September 6, with the return encounter in Algeria slated for September 10.

Meanwhile, the upcoming friendly with the Phobians will come off at the Accra Sports Stadium on Wednesday morning at 08:00GMT. Gate will be opened for free for fans who will want to watch the two teams go head to head.