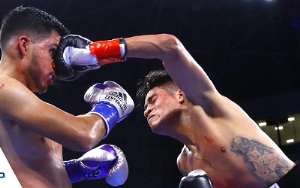 Navarrete (28-1, 24 KO) was coming off back-to-back wins over Ghanaian Isaac Dogboe and shows no signs of relinquishing the WBO strap with his victory.

In what has since been touted as a 'Round of the Year' contender, Navarrete and De Vaca went toe-to-toe in the third round trading vicious punches.

However, the referee came to the previously De Vaca's aid to save him from further punishment.

De Vaca, 24, was dropped in the second round before referee Raul Caiz Sr stopped the fight at 1:54 in the third round.

It will be recalled that the previously unheralded Navarrete came out of nowhere to upset Dogboe last December. He repeated the dose in even more spectacular fashion in their May rematch.

The Mexican is billed to defend the belt again on September 14.

Watch the final round below;