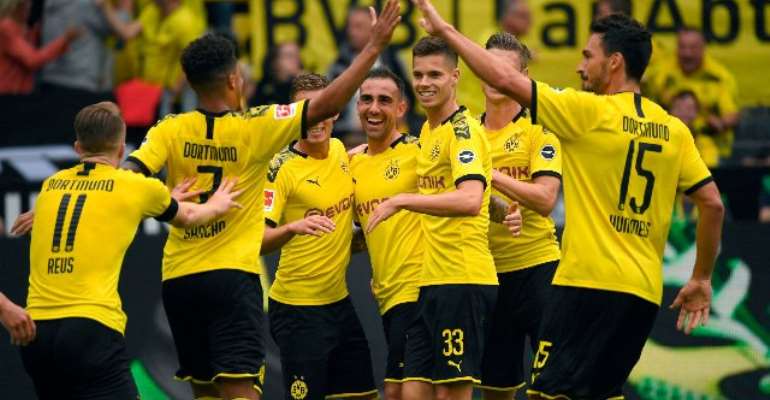 TITLE HOPES
Title contenders, Borussia Dortmund's 5-1 victory over Augsburg was their biggest season-opening win. The Ruhr valley club, runners-up last season after squandering a nine-point lead at the halfway mark, have set their sights on the title after last winning the league in 2012.

TRANSFER TIME
Champions Bayern Munich stumbled to a 2-2 draw against Hertha Berlin in their opener but off the pitch they have been more successful, signing France youth international Michael Cuisance and agreeing terms with Barcelona's Philippe Coutinho.

Midfielder Coutinho was in Munich to pass a medical check on Sunday and is expected to sign a one-year loan deal this week.

SANCHES FURY
The Bavarians, however, will have a decision to make over Portugal international Renato Sanches, who is desperate to leave due to limited playing opportunities.

"The situation is not good for me," said Sanches after coming on as a late substitute against Hertha.

"I again asked the club to leave and join a different club. But they did not let me leave. Five minutes, like today, is not enough for me," he said.

Sanches, who joined in 2016, has failed to hold down a starting spot amid tough competition and has repeatedly vented his anger at being given little playing time.

WINNING START
Eintracht Frankfurt edged Hoffenheim 1-0 and have now won all six of their matches in all competitions so far this season, their best start since the 1997/98 campaign.

GULACSI CENTURION
RB Leipzig goalkeeper Peter Gulacsi became the club's first player to reach 100 appearances in the Bundesliga when he started against Union Berlin on Sunday.

The Hungarian 29-year-old joined Leipzig in 2015 when they were still in the second division and has played for them every season they have been in the top division since 2016.