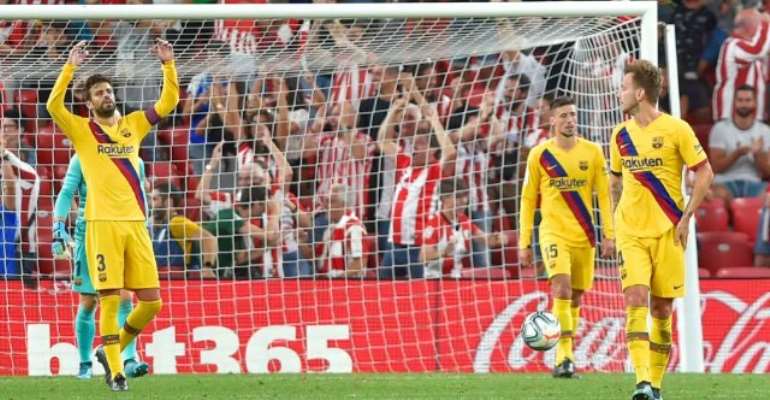 Barcelona began their title defence with a 1-0 defeat by Athletic Bilbao on Friday, while Zinedine Zidane’s Real Madrid beat Celta Vigo 3-1 on Saturday.

Here are the five big talking points from the weekend in La Liga.

Rumours in Spanish media have linked Barcelona with Paris St. Germain forward Neymar all summer, even though the Catalans already signed Antoine Griezmann from Atletico Madrid.

However as Athletic shut out Ernesto Valverde’s side, shorn of injured captain Lionel Messi, it became evident why Barcelona want to bring the Brazilian back to Camp Nou.

Valverde was forced to throw on Rafinha Alcantara for Luis Suarez after the Uruguayan tweaked a calf muscle, while B team winger Carles Perez was also thrown on to no avail as the Catalans tried to win the game.

However, Zinedine Zidane picked a side to face Celta Vigo which could have turned out last season for Madrid.

Other new signings Luka Jovic and Eder Militao watched from the bench as the old guard picked up a good result in Vigo.

Two players who have been continuously touted to leave this summer, Gareth Bale and James Rodriguez, were involved -- the Welshman starting and the Colombian watching from the bench as an unused substitute.

Bale created a goal for Karim Benzema with a fine dribble and it seemed like little had changed from Zidane’s first era in charge.

The former Burnley right-back made his debut as Atletico beat Getafe 1-0 on Sunday and it was his cross which created the goal for Alvaro Morata.

Trippier attacked with abandon and gave Atletico a dangerous outlet on the right flank, with other crosses causing the Getafe defence problems.

There are question marks over the England full back’s quality in purely defensive tasks, but starting with a solid display and a clean sheet at the Wanda Metropolitano was a good way to respond.

SOLDADO AND CAZORLA ROLL BACK THE YEARS
The most entertaining game of the weekend in Spain was a 4-4 draw between Villarreal and Granada on Saturday, with each side boasting a veteran Spain international who hit the target.

Santi Cazorla opened the scoring from the penalty spot and was the standout player in the thriller on Spain’s east coast.

However former Villarreal and Tottenham striker Roberto Soldado inspired the newly-promoted side to fight back from 4-2 down, heading home on his debut to pull Granada within one goal of the hosts.

Another Soldado header was nodded over the line by Antonio Puertas in the 81st minute for the Andalusians’ equaliser.

ACHILLES TENSION
Real Madrid midfielder Luka Modric and Getafe striker Jose Molina were both dismissed this weekend for nearly identical fouls, with the pair catching the Achilles tendon of an opponent with their studs.

Neither challenge would have been greeted with a red card in previous La Liga seasons, leaving players and fans angry with the decisions.

Deliberate attempts to hack an opponent on the Achilles tendon from behind are to be punished with sendings off this season.

"The truth is that I don’t understand it because last Friday we had a chat (with the refereeing federation) and they made it clear that it was (to be a red) when it was done intentionally,” said Getafe coach Jorge Boradalas.

"I don’t understand it in the case of Modric or Jorge Molina."