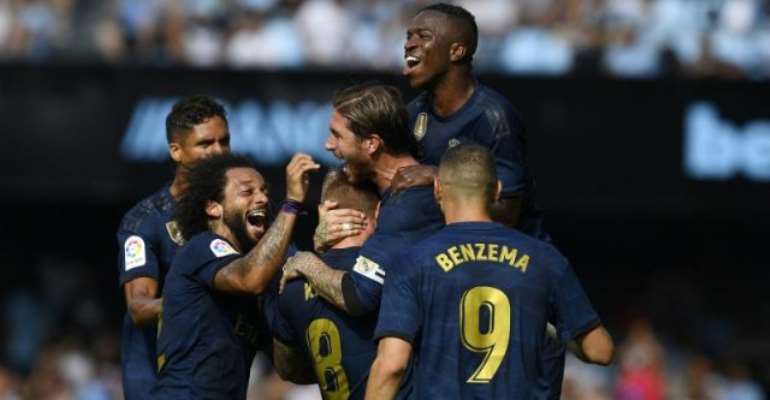 Real Madrid got off to a flying start in La Liga by beating Celta Vigo 3-1 away from home on Saturday with the help of a magnificent long-range strike from Toni Kroos, although they had Ballon d'Or winner Luka Modric sent off for a straight red card.

Karim Benzema put Madrid ahead in the 12th minute after a superb piece of wing play from Gareth Bale, who had earned a surprise starting berth due to injury to Eden Hazard after a close-season period of uncertainty over his future.

Celta had an equaliser ruled out on the stroke of halftime for offside after a video review but they benefitted from the use of the technology in the 56th minute when Modric was punished for raking his studs against the heel of Denis Suarez.

The hosts could not make the most of the extra man as German midfielder Kroos doubled Madrid's lead five minutes later with an unstoppable distance strike, while substitute Lucas Vazquez added a third in the 80th after a pass from Benzema.

Celta finally managed to get a goal back in stoppage time when 18-year-old Iker Losada scored two minutes after coming off the bench to make his first-team debut.

You Won't Be Shielded For Misconduct – IGP Cautions Police O...
29 minutes ago