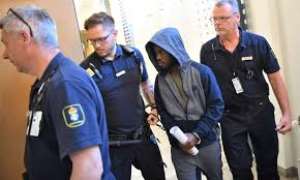 Kumasi Asante Kotoko has debunked reports in the media suggesting that they have successfully signed former Malmo FF midfield kingpin Kingsley Sarfo on a free transfer.

This follows several reports in the local media citing that the player who is currently serving jail time in Sweden for rape has been released.

That news was quickly linked with the fact that the Porcupine Warriors had recruited the player to boost their squad as they continue their campaign in the CAF Champions League.

Speaking in an interview with Ashh FM however, Communication Director for the club, Kennedy Boakye-Ansah has refuted the reports whiles explain that they have rather recruited former Wa All Stars player Kingsley Effah.

“It is never true Kotoko have signed Kingsley Sarfo formerly of Malmo FF in Sweden but it's Kingsley Effah formerly of Wa All Stars", he clarified.

Meanwhile, the Ghana Premier League giants continue their preparations ahead of their second leg fixture with Nigerian side Kano Pillars in the first qualifying round of the CAF Champions League.

The match will be played at the Baba Yara Sports Stadium on Sunday, August 25, 2019.