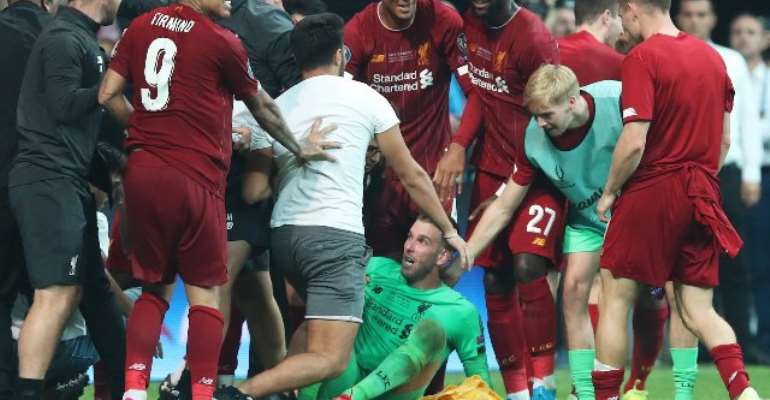 Liverpool goalkeeper Adrian could miss his side's Premier League game against Southampton on Saturday after a collision with a pitch invader.

Manager Jurgen Klopp says the Spaniard was injured during post-match celebrations following Liverpool's win over Chelsea in the Super Cup on Wednesday.

"A supporter jumped over something, was chased by some security guys, slipped and kicked his ankle. Crazy," Klopp said after Adrian saved Tammy Abraham's penalty in the shootout win."

He added: "Apart from that it was a brilliant night for him."

The incident happened as the Liverpool players were huddled together celebrating the match-winning save.

A supporter, attempting to join the group, ran towards them, slipping as he was grabbed by a steward, and collided with several players.

"We played against Manchester City and someone ran on the pitch then.

"At Norwich, there was someone as well.
"I don't know what you can do about it in the stadium but that means there is a lot of responsibility for the supporters as well. If one person cannot hesitate or stop himself, then the people around should do it because it's not funny. It's crazy. You think 'wow, how can something like this happen?'"

Liverpool's third-choice keeper Andy Lonergan, 35, who was an unused substitute for the game in Istanbul which finished 2-2 after extra time, could deputise for Adrian if the 32-year-old is ruled out.

Liverpool's first-choice keeper Alisson is sidelined with a calf injury and when asked, Klopp said Lonergan was "ready" if needed.

Best known for his time at Preston, the veteran has played for a host clubs and arrived at Anfield in the summer after being released by Middlesbrough following a loan spell at Rochdale.

Klopp also has 20-year-old academy graduate Caoimhin Kelleher as an option but added: "The decision will be made tomorrow. No chance to make it earlier."

Meanwhile, Liverpool have called off transfer talks with Serie A side Roma over defender Dejan Lovren.

It comes after Roma indicated they were willing to make a €20m deal to sign the Croatia centre-back only to fail to make an official offer.

Instead, Roma are understood to have used intermediaries to attempt loan Lovren for a small fee.