Neymar 'made mistakes' in push for PSG exit 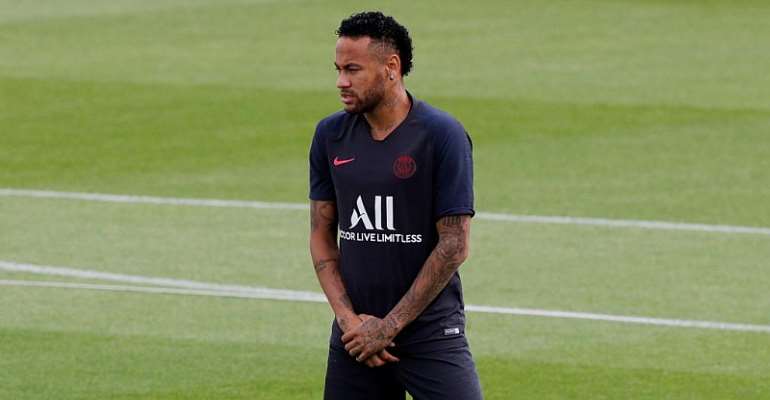 Neymar has “made mistakes” in his rush to leave Paris Saint-Germain, according to sporting director Leonardo.

The Brazilian's seemingly inevitable departure from the French champions is proving a long, drawn out affair.

Having arrived in 2017 after a world-record transfer from Barcelona, Neymar's reputation has taken a serious hit.

PSG fans displayed insulting banners aimed at the 27-year-old during their 3-0 opening day victory over Nimes on Sunday night.

Barcelona have held talks with the club over a potential move this week, but Leonardo insists that nothing has advanced.

“He's a Paris Saint-Germain player, he's still in Paris for three years, so do not forget. We must analyse everything, we must fix everything before he can play again," Leonardo said.

"Neymar has made mistakes. Over time, I have gotten to know him. I honestly think he is a good boy with a very good heart. On the pitch, he is an extraordinary player."

Since moving to the Parc des Princes, Neymar has played in less than half of his club's matches, missing three of their four crucial Champions League knockout games.

While injuries and controversies have overshadowed his stay, he has been brilliant on the pitch, scoring 51 goals in 58 appearances.

"I like Neymar, I want to keep playing with him, with Kylian and with everyone," coach Thomas Tuchel said last weekend.

"But the reality is that we must find solutions without him. You can't lose Neymar and just find someone else who will do the same things."

The summer signings made under sporting director Leonardo have been a step in the right direction.

More reinforcements could be brought in too with the money recouped from the potential sale of Neymar, and the saving made on his 36 million-euro annual wage.

Off the field, there are growing concerns about the impact of Neymar's departure on the brands of PSG and Ligue 1.

The French top flight is in a state of renewal, with star players such as Nicolas Pepe, Tanguy Ndombele and Ismaila Sarr all leaving this summer.

If Barcelona want to complete the deal, they must do so before the transfer window closes on Monday September 2.