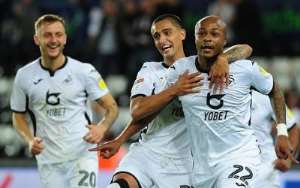 Ghanaian international, Andre Dede Ayew has revealed that he is open to staying with English Championship side Swansea City despite the uncertainty surrounding his future.

The hardworking attacker has been linked with a move away from the side following his return from national team duties where he represented the Black Stars at the 2019 Africa Cup of Nations.

Speaking in an interview after bagging a brace for the Swans in their 3-1 victory over Northampton in the Carabao cup earlier this week, Dede Ayew has stressed that he is contracted to the Championship side and will have no problem staying for the remainder of the season.

“I'm a Swansea player and I am working hard for the games that are coming up. The gaffer has been clear and honest with me and I want to thank him for that, Ayew shared.

He added, ''A lot of things have been said but, for me, what’s important is to work hard, try to get to full fitness and, if I’m here, go for it”.

The Black Stars captain is in contention to feature for Swansea City when they welcome Preston North End in the Championship to the Liberty Stadium tomorrow.