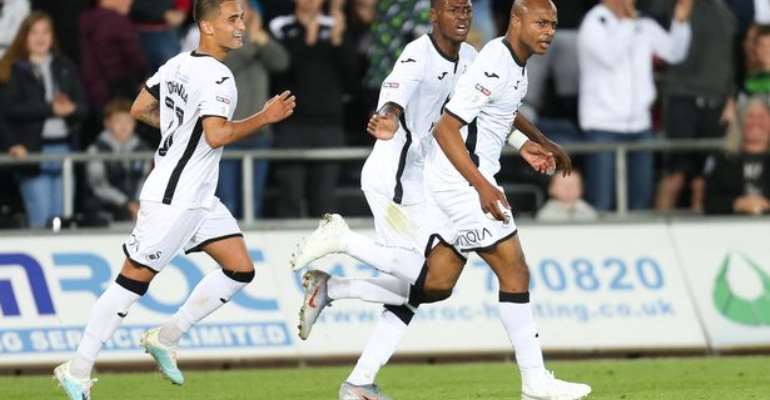 Ghana skipper, Andre Ayew has pledged to give his all to the cause while he remains at Swansea City having impacted in the Carabao Cup win over Northampton Town on Tuesday night.

The Swans were trailing 1-0 to the League Two outfit until the former West Ham United forward climbed off the bench for what was his first appearance for the club since their final Premier League game against Stoke City in May 2018 to score twice, with George Byers also netting.

They were the Ghana forward's first goals for the Swans in 1,185 days.

And while Ayew could yet depart the club this month, the cup hero has hailed head coach Steve Cooper for the way he has treated him since his return to Fairwood.

“I’m a Swansea player and I am working hard for the games that are coming up," the 29-year-old told the club's official website.

"The gaffer has been clear and honest with me and I want to thank him for that.

“He’s given me a lot of confidence and trust in the way that he speaks to me. I really feel like I’m welcome and that’s a good feeling.

“A lot of things have been said but, for me, what’s important is to work hard, try to get to full fitness and, if I’m here, go for it.”

Victory over the Cobblers ensured Swansea progressed into the second round of this season's competition, with Cooper's men drawn to face Cambridge United at the Liberty Stadium later this month.

As a result of his efforts against Keith Curle's side, Ayew could now be in contention to feature for the Swans in their Championship clash with Preston in South Wales on Saturday.

It's a far cry from how the picture looked just weeks ago when the forward appeared destined for the exit door, with the club eager to offload Ayew from the wage bill.

Erectile Dysfunction Can Cause Stroke, Heart Attack - Consul...
41 minutes ago