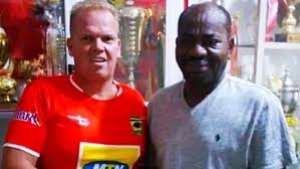 His comments come on the back of the clubs recent impressive performance in Nigeria when they locked horns with Kano Pillars for the first leg of their first-round tie in the CAF Champions League.

Though the match ended 3-2 in favour of the Kano based club, George Amoako opines that the technical abilities of the Norwegian tactician on the matchday were very impressive.

According to the experienced football administrator, the coach deployed three different formations and that helped them to score two important away goals despite losing at the end of the day.

“He used all the three to get this result. He knows what he is about”, George Amoako stressed in an interview after returning to Ghana.

Coach Kjetil Zachariassen is expected to come up with a strategy to overturn the 3-2 loss last weekend when the two side meet for the second leg of the tie on Friday, August 23, 2019, at the Baba Yara Sports Stadium.