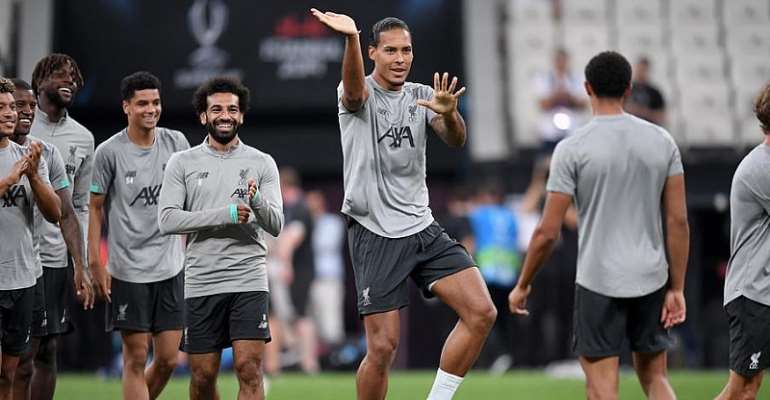 Liverpool and Chelsea are eyeing some early-season silverware as the Premier League rivals meet in the Uefa Super Cup in Istanbul on Wednesday in what will be the first major men's European encounter to be refereed by a woman, with France's Stephanie Frappart taking charge.

Jurgen Klopp's Liverpool have a settled look and are hoping momentum will carry them through this campaign on the back of their victory in the Champions League final in June, a triumph which ended a seven-year trophy drought.

In contrast, Chelsea have lost star man Eden Hazard since winning the Europa League and replaced the departed Maurizio Sarri with the relatively inexperienced Frank Lampard in the dugout.

Lampard's managerial career at the club he served with such distinction as a player began with a 4-0 humbling at the hands of Manchester United on Sunday.

It is little wonder that Liverpool are favourites to win the Super Cup for the fourth time in Wednesday's match, at the home of Besiktas on the European side of the Bosphorus.

Their last victory in the one-off showpiece came in 2005, just after their stunning win over AC Milan to win the Champions League in Istanbul.

LAMPARD PRAISED
"We won one competition last year, that's all. This team is built for being successful and that is what we try to do. Tomorrow (Wednesday) night is another chance for us," insisted Klopp.

However, the German warned his team to be wary of a new-look Chelsea, whose performance against United was generally accepted to be far better than the final result suggested.

"If people really think that Chelsea is not a real challenge then I can't help these people," Klopp said.

"They are really strong and young and fresh, and everything is exciting in the moment because Frank is there, new, the club legend.

"It will be really interesting, and for us it's a really important game."

'SMART DECISION'
Lampard himself played in two Super Cup defeats as a Chelsea player in the early part of this decade, and he knows how big a lift it would be for his side to come out on top in Turkey.

A transfer ban has prevented him from strengthening over the summer and he has instead given a chance to youth, with Tammy Abraham and Mason Mount – aged 21 and 20 respectively – both hoping to keep their places after starting at the weekend.

"I'll pick the best team to win the game, regardless of age. Mason Mount deserved his chance on absolute merit as opposed to age," Lampard said.

"I will have no fears to play young players, it's important at a club like Chelsea that we do that, but they need to deserve the chance."

N'Golo Kante is a fitness doubt after a summer plagued by problems, while Lampard admitted that neither Willian nor Antonio Rudiger is ready to start.

Meanwhile, recent signing Adrian will be in goal for Liverpool in the absence of first-choice 'keeper Alisson Becker, who is out with a calf injury.

It will all be watched over by Frappart, the 35-year-old Frenchwoman who is no stranger to the spotlight, and her two assistants, compatriot Manuela Nicolosi and Ireland's Michelle O'Neill.

Frappart took charge of the women's World Cup final last month and earlier this year she became the first woman to referee a men's match in Ligue 1 in her home country. Little wonder she insisted that "nothing changes" for her in this game.

"It's great news, I'm very pleased to be a part of this moment in history which is very much due," said Lampard.

Klopp added: "I am happy that we can be part of a historic moment. It's a very smart decision to have a woman referee a very, very important game."