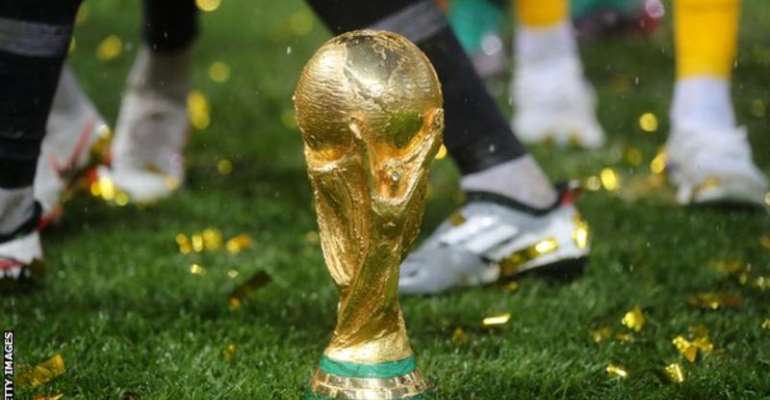 Coach Angel Lopez has named a 25-man squad for the Qatar 2022 preliminaries between 2 and 10 September.

Equatorial Guinea play away in the first leg and then host the return leg.

Nlavo, who turns 17 in November, is from champions Cano Sport Academy and has played for Equatorial Guinea's home-based side.

He featured and scored in both legs of their 5-4 aggregate win over Chad in the African Nations Championship qualifiers.

There are two notable omissions from the squad that won 4-1 away in the Sudan in March in a credible end to their 2019 Africa Cup of Nations qualifying campaign.

Veteran centre back Rui da Gracia Gomes, 34, has been dropped in a signal that his international career has come to an end, along with midfielder Carlos Martin Briones, otherwise known as Charly.

There are still 10 players from Spanish clubs in the squad, although those affiliated to top flight clubs play in their B or reserves team in the lower leagues.

Only former West ham midfielder Pedro Obiang, now back in Italy with Sassuolo, and captain Emilio Nsue, who plays in Cyprus with Apollon after spells at Middlesbrough and Birmingham City, can boast of time played at a high club level.

Santiago Eneme, who made his debut aged 17 last year in the Cup of Nations qualifiers, returns to the squad.

Now 18, he moved in March from Cano Sport Academy to Nantes in France, where he is a member of the French club's under-19 side.

Equatorial Guinea are the first country to finalise their squad for next month's qualifiers, which feature the 28 lowest ranked teams playing in 14 knockout ties. The winners advance to the group stage where they will be drawn in with the 26 top-ranked countries given a bye into the second round.