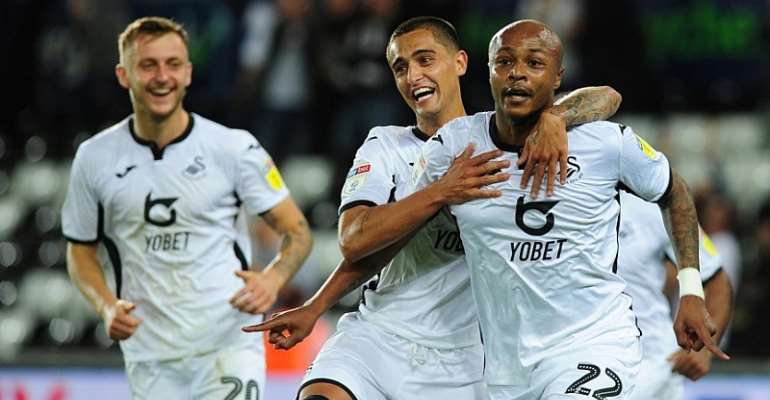 It was a dream return for Andre Dede Ayew as he hit a brace for Swansea City in their 3-1 win over Northampton in the Carabao Cup on Tuesday night.

The visitors took a deserved lead in the 61st minute with Matt Warburton’s low finish.

Andre Ayew headed them level in the 80th minute with his first goal for the club since May 2016.

George Byers’ strike from the edge of the area put them ahead three minutes later before Ayew nodded in his second.

Swansea’s late surge brought relief to the Liberty Stadium crowd, who had been getting twitchy after watching their side – showing 11 changes from Saturday’s Championship draw at Derby – struggle against a Northampton team with seven changes from their draw with Port Vale.

The final 10 minutes offered encouragement for Swans head coach Steve Cooper, with a lively debut from substitute forward Jordon Garrick and a promising cameo from Ayew.

As one of the club’s highest earners, the former West Ham United and Marseille player had been expected to leave this summer.

But, with no clubs showing interest at the moment, the 29-year-old Ghana forward has been welcomed back into the Swansea fold and he could yet prove to be a valuable asset in the Championship.

Ayew spent last season on loan at Fenerbahce and had been expected to leave the Liberty Stadium this summer.