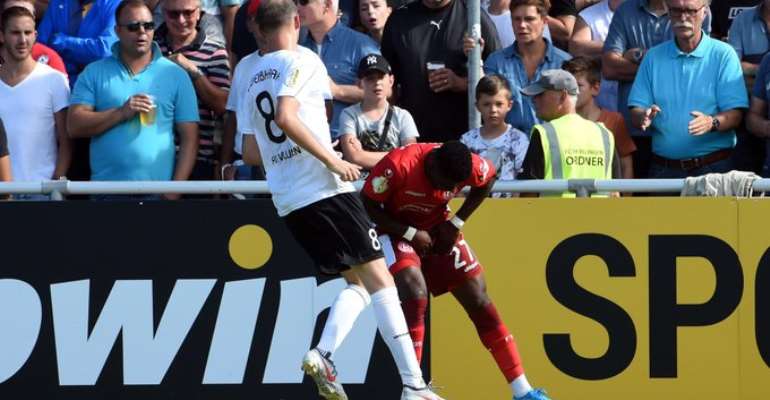 Ghanaian forward, Nana Opoku Ampomah has been ruled out of Fortuna Düsseldorf’s opening match in the German Bundesliga against Werder Bremen after picking up a muscle tear injury.

The young attacker who joined from Belgian side Waasland-Beveren has been exciting for the side in pre-season and continued to impress during their German Cup match over the weekend when he marked his competitive debut.

He was handed a starting role when Fortuna Düsseldorf locked horns with lower division side Villingen in the preliminary stage of the German Cup.

Though he played an instrumental role and managed to score, his day was cut short when he was forced off the pitch after suffering a torn a muscle (an abductor injury) in his left thigh.

Despite going on to win the tie 3-1, the club has confirmed that the tricky winger will be sidelined for weeks, meaning he will not be available for the Bundesliga opener this weekend.

“Nana Ampomah has torn a muscle in the abductor area and will be out of action until further notice. Get well soon, Nana”, a statement Fortuna Düsseldorf said.

The match between Fortuna and Bremen comes off on Saturday, August 17, 2019, and both sides will be hoping to bag the three points at stake to start their season on a good note.