Simone Biles Is Officially The Most Decorated Gymnast In World History 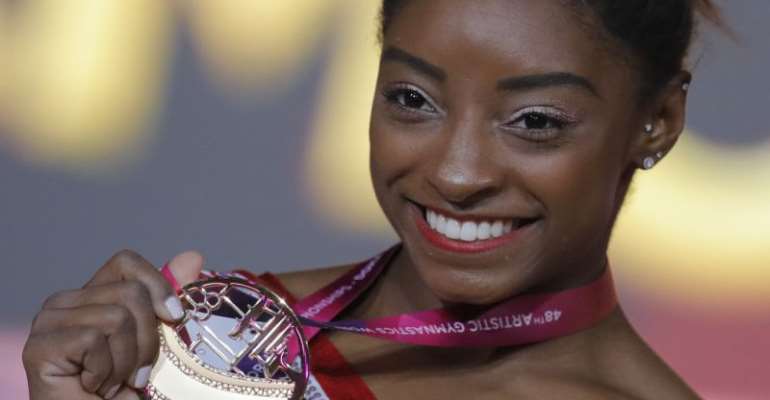 Another day, another record for Simone Biles at the World Championships. The gymnastics superstar has three golds in four tries at the competition in Doha, Quatar, and has set medal record marks each of the past two days in individual events.

With gold on the vault, Biles, who is dealing with kidney stones, set the record for most career world titles. A silver on the uneven bars, her first world medal in the event, makes her the first American to medal in every event at worlds.

Biles won gold in the world vault competition, breaking a tie she made less than 24 hours prior for most world gold medals.

The victory pushed her to 13 golds, one more than Vitaly Scherbo of Belarus. Scherbo last competed in 1996 and was inducted to the International Gymnastics Hall of Fame in 2009. He has 23 world championship medals.

The gold in vault is Biles’ first in three tries at worlds. She has two silvers and a bronze. She earned the top spot with 15.366 points, a margin of .850 over second-place finisher Shallon Olsen of Canada.

Biles competed with the overall highest combined difficulty at 6.0 on her first jump and 5.8 on her second. She had execution scores of 9.266 and 9.666, respectively. After sitting down on her signature vault during Thursday’s all-around competition, she took out some of the difficulty according to NBC Olympics writer Nick Zaccardi.

Nina Derwael of Belgium put an end to any potential 6-for-6 world outing for Biles. Derwael won the uneven bars title with 15.200 points consisting of a 8.700 execution and 6.500 difficulty.

Biles placed second with 14.700 (8.500/6.200), five-tenths of a point behind for her first medal in the world competition. The medal comes one year to the day after she returned to practice on the bars after the 2016 Rio Olympics, where she placed 14th.

With the silver, she is the first American to medal in every world championships event (team, individual, all-around and on all four apparatuses).

Her highest place during the years in between was fourth six separate times.

Biles has more to reach at 2018 Worlds
The 21-year-old will compete on the balance beams and in the floor exercise to close out the 2018 World Championships on Saturday. If she earns medals in both of them she’ll become the first woman to reach the podium in every event at worlds since Yelena Shushunova did it in 1987 for Soviet Russian.

Biles currently has 18 world medals in total. Two more will tie Russian Svetlana Khorkina for most medals for a woman at 20.