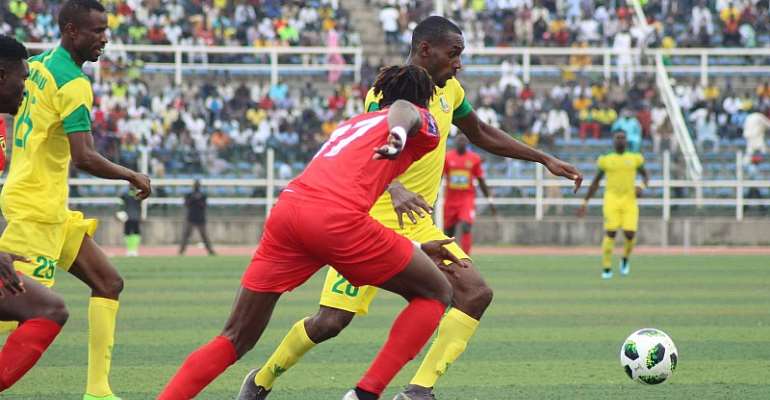 Asante Kotoko midfielder, Justice Blay has reiterated that his outfit are determined to eliminate Kano Pillars from the CAF Champions League despite losing in the first leg.

The Nigerian side whipped the Porcupine Warriors by 3:2 in the preliminary first round fixture at the Sani Abacha Stadium on last Saturday.

From coming back from a goal down, Kotoko sensationally went 2-1 up at a point before the home side raised their game to snatch a dramatic 3-2 victory in the end.

“We scored twice in Nigeria which is a plus for us going to the return leg in Kumasi. I believe we can eliminate them in Kumasi," Blay told reporters on the Porcupines' arrival in Ghana on Sunday.

“We are very determined to secure next round qualification even though Kano Pillars will also come to the return leg with the same ambition.

“With the two preseason friendlies in Kumasi, I have realised that as players what we can do for the supporters to be happy is to win and we will start with Kano Pillars in the return leg.

“We will only plead with the supporters to come to the stadium in their numbers during the return leg and I know we will beat Kano Pillars in Kumasi."

A new Kotoko signing, there was a special delight for Blay on Saturday as he got his name on the score sheet in what was his competitive debut for his new side.

“I’m happy to have scored for Kotoko in my debut Champions League game," the former Medeama man remarked.

“It was a memorable one for me as a player."
The return fixture is set for Kumasi's Baba Yara Sports Stadium.