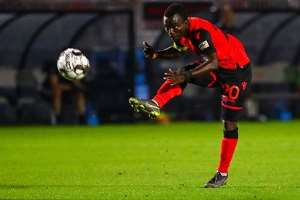 Solomon Asante helped his Phoenix Rising club to set a new club record after beating EL Paso Locomotive FC 2-1 to take their unbeaten run in the USL Championship to 13 this season.

The victory has increased the club’s home unbeaten run to 14 after maintaining their winning streak since last season’s play-off.

Phoenix Rising shot into the lead in the early stages but Locomotive FC pulled parity before Asante’s team sealed victory.

However, the Ghanaian winger became the target of rough play as James Kiffe had to be sent off for elbowing the Ghanaian in the face.

“From the beginning, it got a little out of control,” Rising goalkeeper Zac Lubin said of the officiating. “I think there were a couple times we could’ve gotten a penalty in the first half and it wasn’t given. They were starting to put some tackles in. It started to get very physical.

“I think he (referee) got control of the game with the yellows, but then he kind of let it go in the second half. … We had to battle through that. We’re not always going to get calls [and refs] go our way so we have to focus on what we want to do and play our game.”

With a man down, Phoenix capitalised on their numerical advantage and pressed until they got the winning goal.