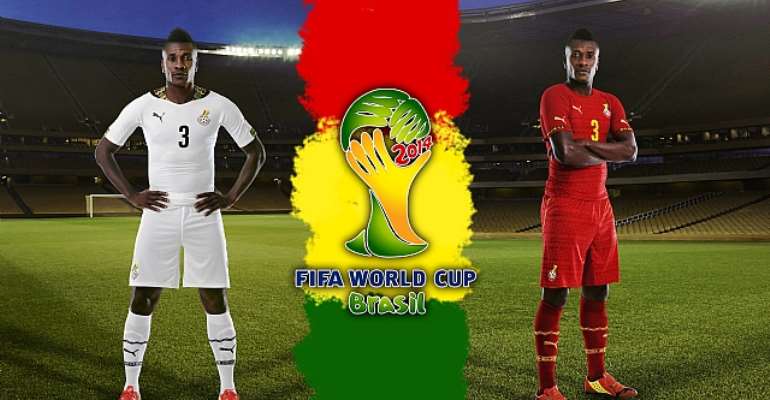 Truth be told, Asamoah Gyan is the greatest player Ghana has ever seen. Yes, he couldn't win the African best player as the maestro, Abedi Pele did. However, his individual achievements for Ghana is superior to that of Abedi Pele - subject to debate though.

In terms of attitude and morals, we all know Asamoah Gyan to be a suspect. People close to the Blackstars will tell you how a bad influence Asamoah Gyan is, to his teammates. If you want one of the kingpins who monetised Blackstars, you will certainly not be counting two players without mentioning Asamoah Gyan.

Unlike the great living legend, Stephen Appiah, who is known for his positive influence on the team, Asamoah Gyan is the direct opposite. Stephen is said to have always cautioned his teammates not to focus too much on money at the expense of making Ghana proud. On the other hand, Asamoah Gyan would tell his teammates not to play without money being paid to him. A typical example is a catastrophic blunder in Brazil which mangled Ghana's reputation internationally and turned us into a subject of international ridicule and mockery.

Reports have it that, when the players ganged up not to play until their bonuses were paid, he, as the leader who ought to have been farsighted in calming his colleagues down so as to avoid causing any embarrassment to Ghana, rather, engineered, led, and spurred on the rebellion that caused Ghana its reputation. It is said that when the president at the time, John Mahama placed a call to speak with him, he impudently retorted - "is he bringing the money"?

The Brazil fiasco was a clear demonstration of the incompetence of the sports minister at the time, Elvis Afriyie Ankrah but it could have been mitigated if people like Asamoah Gyan had not preferred money over the image of Ghana. Since Brazil fiasco under the engineering of Gyan, Blackstars has never been able to gain the massive support it used to enjoy from Ghanaians. Ghanaians came to know through the Justice Dzamefe commission and the tongue of the irredeemably corrupt Nyantakyi, that Blackstar was a cash cow for a few "football people". (Countryman songo, I need you here!)

To buttress this trait of Gyan, if we recall, prior to the start of this AFCON tournament, Ghanaians whose taxes were going to be used to pay the players were not too happy about the amount that was being paid to the players. Asamoah Gyan in a brazen display of disdain for Ghanaians, recorded a video in which he said - to the nearest meaning - "you guys are talking? When we were suffering where you? Now we're taking money and you talking. Siasɛm kwa". To this end, whereas I believe Asamoah Gyan is the greatest Ghanaian player of all time, he's the worst captain of all time!

This week, my good friend and darling Gyan has been talking. Clearly, his comments are borne out of bitterness and frustration. His bitterness and frustration were given rise to by his 'promodemotion' from a captain to a general captain. He couldn't fathom why the captain armband would be taken from a 'mighty' player like him. It took a presidential intervention to get him to rescind his decision to resign from the team owing to the coach's decision to 'promodemote' him to a general captain. Let's not forget that he, Gyan, became captain through a similar route when John Mensah became a general captain and him, a captain. John Mensah didn't resign because he was 'promodemoted'... This emphasizes the self-seeking nature of Gyan.

His all-out attacks this week could be akin to pulling a dagger - he virtually pulled a dagger on everyone in Ghana except his good partner, the irredeemably corrupt Nyantakyi. What he said about the coach, Dede Ayew, Kwabena Owusu, etc. we're nothing more than punches. I will spend my energy on two things out of the things he said because of these two highlights and seal the descriptions people have given to Gyan.

First, he lambasted Kwabena Owusu for disclosing that the Blackstars were given $20,000 contrary to earlier claims of $80,000 by officials. Gyan claims it's an abomination for the young chap to have told the taxpayers how much of our money was given to they the players who are supposed to work at our beck and call. This reminds me of when irredeemably corrupt Sani Dara, once claimed that budget for AFCON in Equatorial Guinea, was a state secret and as such was not disclosable to the taxpayers. One of the first signals of corruption is secrecy.

Whenever you find a person working for the state trying to hide figures and numbers, you can be sure something fishy is happening. For Gyan to have hit hard at his colleague, who in good conscience felt that Ghanaians have a right to know how much they are paid from our taxes, particularly when it had become a matter of public dispute, highlights Gyan's inherent selfish nature. May I join all Ghanaians to tell Gyan that - the right to information about what taxes of citizens are used for, including national player's salaries/bonuses, is a standard practice in all civilised countries. If he claims it is not done anywhere, he should look at Germany, USA, UK, etc.

In fact Ghana pays higher bonuses than all the countries I have mentioned. Players in those countries rather see the national team as prestige and national duty and not a money-grubbing avenue unlike Gyan and his likes. Most players in those advanced countries are only interested in wearing the national jersey because it's their thinking and rightly so, that, their real jobs are at the club levels where they take salaries from. Why doesn't Gyan emulate the selfless dedication of those players to their countries but rather seeks to throw dust into our eyes that discussions about national team bonuses are not done anywhere? What?

You expect us to shut up while our meagre resources are dissipated on a few individuals in the name of football when our people have no access to healthcare, food, water, quality education, etc? The gods must be going crazy. No poor country like ours will consider giving thousands of dollars to players as a minor issue when professors have no monies for research and hospitals lack beds. It won't happen!

My second pick is his claim that Ghanaians destroyed an "angel" Nyantakyi. Hehe! Like seriously? Who asked the mouse to pick the meat from the trap? Gyan, if you may know, we don't consider, your Nyantakyi as an angel. Yes, we can't take the achievements of the irredeemably corrupt Nyantakyi for granted. He took Ghana to the world cup three times, yes! He killed Ghana league, yes! Maybe you have to read the Dzamefe Commission report. We remember how corruption was craftily referred to as "coefficient".

It's Gyan's contention that the man rose to the highest level in football and so he shouldn't have been punished. Sepp Blatter sef was removed on grounds of corruption. Wetin you dey talk? Nyantakyi's individual rise cannot be a substitute for the collective good of Ghana football. The coefficient man fell by his own sword. Nobody destroyed him. From the #12 exposē by the ace investigative journalist, Anas Aremeyaw Anas, Nyantakyi literally laid bare all the tricks he uses to siphon sponsorship monies for Ghana's league.

No wonder our league was drier than the Sahara desert. I remember somewhere in 2004 or so, how 25% of sponsorship money was mysteriously given to a non-existent company called Midland sea or so for supposedly brokering the deal that got the sponsorship. To date, nobody has seen even a shadow of that company.

The coefficient man, repeated the trick he used in stealing that sponsorship deal involving the ghost company called Midland, in the #12 exposē by beginning to share the mirage sponsorship in #12 in a certain fashion that would have seen him grab a whopping 25%. All his claims in the #12 exposē were done at his relaxed mood. He wasn't under duress, nor under panic. His innate corrupt nature was simply brought out. How's he an angel?

Because he satisfied your greed to use the national team as a cash cow so he's an angel? Please next time you want to define Angel, don't define it according to your personal benefits from the individual but rather, look at the broader picture of the society.