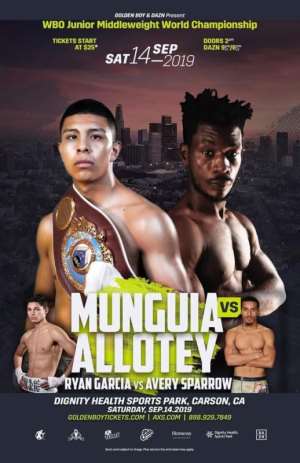 Ghana’s Patrick Allotey (40-3, 30 KO’s) has been offered the chance to win a world title for his country after landing a fight with undefeated Jaime Munguia (33-0, 26 KO’s) of Mexico.

Allotey will be challenging Munguia for his WBO world super welterweight belt.

The fight has been billed to come off on September 14, 2019, in Carson, California and it will be on DAZN.

Munguia and Jessie Vegas agreed on financial terms for a showdown but the fight was cancelled after the reigning WBO super welterweight champion insisted on a 156-pound catchweight.

However, the fight between Munguia and Allotey will be at super welterweight.

Allotey currently holds the WBO Africa super welterweight title and he is ranked number 12 by the world body.

Munguia won the belt in 2018 when he dethroned Sadam Ali after stopping him in round four.

The Mexican hard puncher has then defended the title on four occasions.