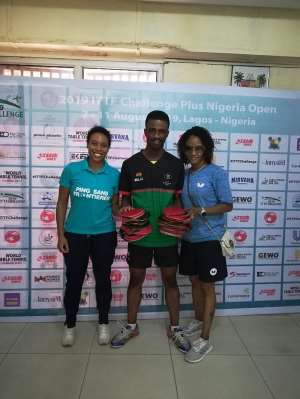 Ping Sans Frontières (PSF), a Table Tennis NGO based in France has donated rubbers to NK Foundation based in Takoradi and its partner Asoba Foundation based in Accra. This kind gesture is to enable both Foundations to introduce more children to the game of table tennis to increase the number of players Ghana currently has.

The Foundations in consultation with some key stakeholders plan to have a competitive and educative environment for children through table tennis mini-cadet and cadet league in the country.

Sarah Hanffou, founder of Ping Sans Frontières made the donations during the ongoing International Table Tennis Federation’s tournament being held in Lagos, Nigeria. The items were received by Emmanuel K. Asante, a member of Ghana’s National Table Tennis team who has become a household brand due his style and performance in Ghana Table Tennis.

Sarah Hanffou is a former African champion and she represented Cameroon at the 2012 Olympics Games in London, UK. In November 2015, she received the Athletes in Excellence Award from the Foundation for Global Sports Development in recognition of her community service efforts and work with the youth.

African champion in year 2000, Sarah Hanffou believes in the combination of sports and education and it is not surprising that she is an astute lawyer in France and urges all children to live that dreams as they combine academics with sports.

In appreciation of the kind gesture from PSF, CEO of NK Foundation Ishmael Abraham Armah thanked Sarah Hanffou and Julia Lewandowski for their constant support and encouragement in helping raise more players in Ghana.

“We really appreciate the great efforts by our partners PSF in getting us accessories and equipment. We will continue to encourage more kids to play table tennis and also help them academically so they can become versatile in future. Our aim is to train about 500 new players before the year ends” Ishmael Abraham Armah, CEO of NK Foundation