CAF CC: Akonangui FC 1-1 Ashgold – Miners Keep Destiny In Their Own Hands Ahead of second Leg 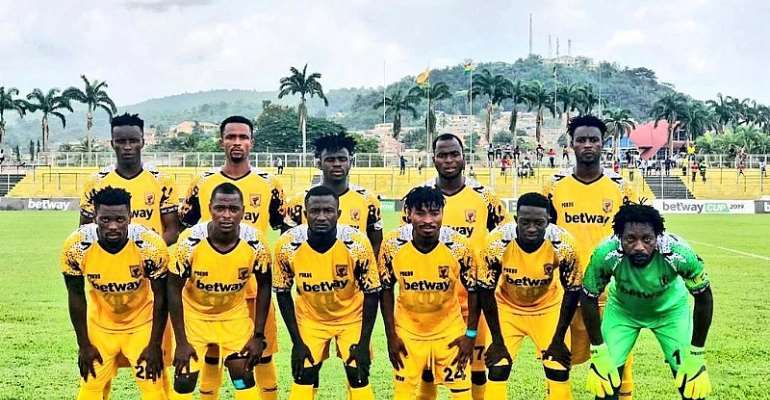 The two clubs locked horns for a cracking first leg encounter in the preliminary round of the 2019/2020 CAF Confederations Cup.

Though both sides were hoping to emerge victorious, they had to settle for a one-all draw at the end of 90 minutes of high intensity but entertaining football.

Nicknamed the Miners, Ashanti Gold stayed compact throughout the first half and went on some dangerous attacking runs in search of an equalizer to give them the lead.

Their impressive showing yielded results 10 minutes after resuming the second half courtesy a beautiful striker from defender Richard Osei Agyemang who scored in acrobatic fashion.

The home side kept their cool and edged the away side into their own half in search of an equalizer to bring them level. Their efforts paid off on the 75th minutes through Diosando Mbele.

Both sides tried to get what would have been the winning goal failed to do so despite creating some decent goal scoring opportunities in the dying minutes of the match.

Ashgold and Akonangui share the spoils on the match day at the end of 90 minutes and will have it all to play for when they meet for the second leg on August 25, 2010, at the Obuasi Len Clay Sports Stadium.