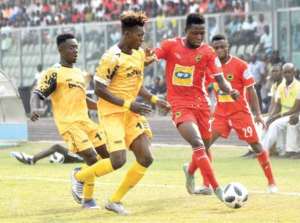 Ghanaian international, Kwame Bonsu has sent a goodwill message to Kumasi Asante Kotoko and Obuasi Ashanti Gold as they gear up to the start of their respective campaigns in this year CAF inter-club competitions.

The Regional rivals are Ghana’s representatives in the annual two-tier competitions organized by the continent’s football governing body.

Whiles Kotoko has been paired to play Nigeria side Kano Pillars in the CAF Champions League, Obuasi Ashanti Gold is also expected to make the trip to Equatorial Guinea to play as a guest to Akonangui FC in the Confederations Cup.

Ahead of both matches later this afternoon, Kwame Bonsu who is a formal player of the Porcupine Warriors has penned a good luck message to the two clubs, backing them for victory.

Bonsu, 25, is currently preparing for the upcoming season with his new club Esperance de Tunis after joining from the Porcupine Warriors this summer.