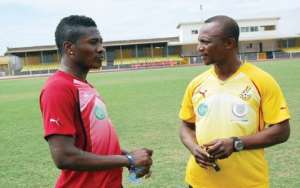 Ghana's general captain, Asamoah Gyan has refused to back Black Stars coach Kwesi Appiah for a contract extension insisting the decision by the authorities must be based on the performance of the team.

Ghana were crashed out of the 2019 Africa Cup of Nations at the round of 16 losing to Tunisia on penalties.

The terrible performance sparked calls for the coach's expiring contract not to be renewed with the Ghana FA currently discuss the future of the coach following Ghana’s disappointing exit from the 22019 Africa Cup of Nations.

Appiah who had his contract extended to December 2019 is relentlessly holding onto his post and will not resign despite calls for his head mostly from Ghanaian fans after the Black Stars disappointing campaign in Egypt.

"It is not for me to make the decision. It is the decision of the authorities," he told Asempa FM.

"Some previous coaches were judged based on their performances so the authorities must base their decision on performance," he added.