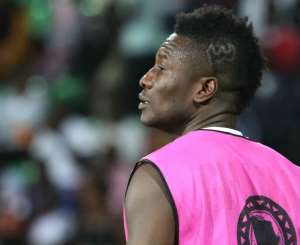 General skipper of the Black Stars, Asamoah Gyan has admitted that he wasn't part of Kwesi Appiah plans during the 2019 Africa Cup of Nations in Egypt.

The country's all-time leading goal scorer was restricted to the substitute bench and used sparingly during the tournament in the North African country.

The 33-year-old failed to score at the tournament for the first time since 2008 due to lack of playing opportunities.

And the former Sunderland hitman has admitted he was not part of the coach's plans for the tournament.

"For me as a natural human being, I don't think I was part of his plans.

However, it doesn't mean he does not like like me as a human being. But he felt he didn't need me at that time. He took his decision and I see it as normal."

Gyan was stripped of the captaincy few weeks to the start of the tournament in Egypt which sparked massive controversy in the West African nation.

He rescinded his decision to retire from the international duty after a conversation with Ghana's president Nana Akufo Addo.