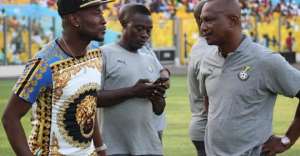 Ghana forward, Asamoah Gyan has sensationally reiterated that Coach Kwesi Appiah's decision to strip him of the Black Stars captaincy ahead of the 2019 Africa Cup of Nations was influenced by 'someone'.

The country's all-time leading goalscorer was relieved off his post as the skipper of the Black Stars ahead of the 32nd edition of Africa's finest tournament.

Swansea City star, Andre Ayew was named as the captain of the team which sparked a furious response from the attacker.

He was subsequently restricted to the substitute bench and used sparingly during the tournament in the North African country.

Gyan failed to score at the tournament for the first time since 2008 due to lack of playing opportunities.

And the former Sunderland hitman believes there were third parties that influenced the decision to play down his influence but failed to call out any name.

"100% I believe Kwesi Appiah was influenced to make those decisions. There is no doubt about that," Gyan told Asempa FM.

"I am the most senior player in the Black Stars so I know what I am talking about.

Gyan was stripped of the captaincy few weeks to the start of the tournament in Egypt which sparked massive controversy in the West African nation.

He rescinded his decision to retire from the international duty after a conversation with Ghana's President Nana Akufo Addo.