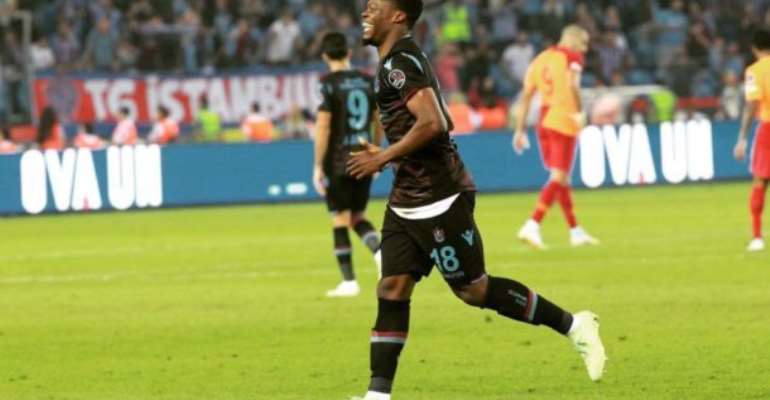 Ghana striker, Caleb Ansah Ekuban, was on target for his side Trabzonspor as they drew two apiece with Benjamin Tetteh’s Sparta Prague in the first leg tie of the penultimate round of the Europa League qualifiers on Thursday evening.

The Turkish side despite conceding twice, came from behind to draw 2-2 against Sparta Prague at the Generali Arena.

Costa Nhamoinesu opened the scoring for the hosts on the 16th minute after mounting incessant pressure on Trabzonspor in attempt to register an early goal.

Trabzonspor after going down in the early stanza of the game, quickly organized themselves and started tormenting the Reds for an equalizer but failed to net the back of the net as Guelor Kanga doubled the home side’s lead on the 68th-minute mark.

But Ekuban, who represented Ghana at the 2019 Africa Cup of Nations pulled a magnificent display on the 84th minute as his sublime finish reduced Sparta Prague’s lead to 2-1.

Five minutes later, Alexander Soerloth scored a fantastic goal to deny his side an away defeat as they crunchy clash ended in a 2-2 draw.

Meanwhile, Black Meteors attacker Benjamin Tetteh lasted 80 minutes in the game for Sparta Prague but was booked on the 55th minute for unsporting behaviour.